We have reached the end of this short series looking into the life and philosophy of Cato the Younger, one of the classic Stoic role models. Following Rob Goodman and Jimmy Soni’s book, Rome’s Last Citizen, we started with indicative, symbolic, even, episodes from Cato’s childhood, examined his conscious embracing of Stoicism, saw him commanding the respect of his troops but also weeping at the death of his half-brother, clashing with his friend-and-rival Cicero, and finally choosing suicide — by gruesome means — in order not to concede a political advantage to his arch-enemy, Julius Caesar.

Interestingly, it was Caesar who ordered the first known portrait of the death of Cato, seen ripping off his own guts when his dagger failed, with the intention of dehumanizing him. The dictator paraded the painting during his triumphal return in Rome, but it backfired, inspiring pity for his vanquished foe among the people.

It was then Cicero, the long time friend and sometimes opponent of Cato, who sat down to write a biography of the Stoic, despite the fact that Cicero now owed his life to Caesar, and could have reasonably be afraid of offending the dictator. Cicero’s Cato is lost, unfortunately, but it clearly had an impact, beginning to build the myth that resonated through the centuries. (Interestingly, it was Brutus — who later became one of the chief conspirators against Caesar — to push Cicero into action.)

Cicero’s book was published in 46 BCE, and Caesar did not appreciate it. Rather than react with magnanimity, as his carefully groomed public image would have required, he ordered his ghostwriter, Hirtius, to write a fiery response. Which also backfired: Hirtus’ Cato, also lost to time, was apparently so over the top that Cato gained even more sympathy among the people of Rome. It isn’t easy to criticize a dead man, apparently.

This is the point in the story when we encounter one of the few female characters in ancient Stoicism or, indeed, in ancient philosophy: Porcia, Cato’s daughter, married to the very same Brutus mentioned above.

The rumor among Republican sympathizers was that Brutus had divorced his first wife and married Porcia out of respect for Cato. Be that as it may, he was going through a rough period, waking up at night in a sweat, clearly worried about something. Porcia asked him what troubled him, but before doing so she set out to prove to him that she could hold any dangerous secret he may reveal, even under torture. Plutarch tells us how she reassured Brutus:

“She took a little knife, such as barbers use to cut the fingernails, and after banishing all her attendants from her chamber, made a deep gash in her thigh, so that there was a copious flow of blood, and after a little while violent pains and chills and fever followed from the wound. Seeing that Brutus was disturbed and greatly distressed, in the height of her anguish she spoke to him thus: ‘Brutus, I am Cato’s daughter.… Now I know that I am superior even to pain.’ Thus having spoken, she showed him her wound and explained her test; whereupon Brutus, amazed and lifting his hands to heaven, prayed that he might succeed in his undertaking and thus show himself a worthy husband of Porcia.”

That undertaking, of course, was the famous conspiracy against Caesar, on the Ides of March 44 BCE. The conspiracy succeeded, but Brutus and the others were eventually hunted down by Marc Anthony and Octavian, the latter going on to become the first emperor, Caesar Augustus. When Porcia heard of Brutus’ defeat and death, she committed suicide, allegedly by swallowing burning coals, though more likely by asphyxiation from their fumes.

Ironically, Augustus actually embraced — in theory — both Republican values and Cato’s memory, probably because he was a savvier politician than Caesar himself. When once visiting Cato’s house, he interrupted a sycophant who was criticizing the Stoic figure, saying that “To seek to keep the established constitution unchanged is a sign of a good citizen and a good man.”

Cato also makes an appearance in Virgil’s Aeneid, the epic poem commissioned by Augustus to provide a strong mythological root for the founding of Rome and, indirectly, for the empire he created. Here is one scene, taking place in the underworld:

Vulcan added the house of Tartarus,
the high doorways of Dis,
the penalties of crime;
and Catiline, you hanging
on a cliff that threatens,
trembling at the Furies’ faces;
and, set apart,
the pious who receive
their laws from Cato.

Seneca, of course, was famous for his reverence of Cato. Here are some examples:

[about choosing a good role model] “Choose a Cato; or, if Cato seems too severe a model, choose … a gentler spirit.”

Or: “For Cato did not survive freedom, nor freedom Cato.”

Lucan, who was Seneca’s nephew, wrote the poem Pharsalia (named after the battle where Caesar defeated Pompey), which was originally intended as in praise of Nero, but ended up a scathing criticism of the regime (which, predictably, cost Lucan his life). He too contributed to the myth of Cato: “The victorious cause was dear to the gods; the lost cause, to Cato.”

Eventually, of course, the Christians came on the scene. They had to deal with Cato too, and their approach was to chide him for, basically, showing off, especially in death. From their perspective, he was guilty of the sin of pride. And yet, even Christian authors couldn’t avoid admiring Cato, with Tertullian, for instance, criticizing the Romans for failing to deify the Stoic figure!

Augustine was both a great admirer of Cato and one of his harshest Christian critics. He considered him almost a pre-Christian in terms of virtue, but of course suicide was not admissible for the new religion, and Cato was most famous (and most admired) precisely for the way he walked through what Epictetus in the meantime had termed “the open door.”

Centuries later, at the dawn of humanism, Dante gave Cato a prime role in his Divine Comedy, having the Stoic stand guard at the entrance of the Mountain of Purgatory. Why? Because as the poet put it, “What man on earth was more worthy to signify God than Cato? Surely none.” 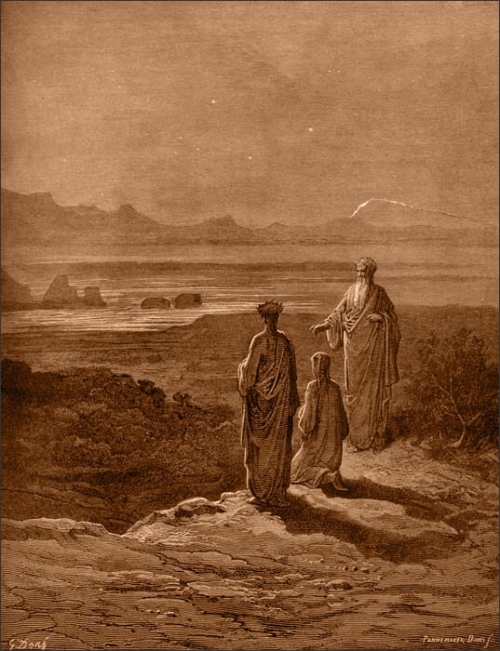 Cato, Dante and Virgil at the entrance of Purgatory

Dante spared Hell to Cato because, although he was a pagan, and died by his own hand, he died for freedom. That set the stage for a new phase of Cato’s legacy: as a revolutionary and a personification of secular virtue. During the late 17th century, Joseph Addison wrote a play titled Cato: A Tragedy, which became influential in both the Old and the New worlds, eventually being quoted by George Washington to inspire his own revolutionary troops at Valley Forge. Incidentally, Washington had began to read Seneca at age 17, and biographer Ron Chernow writes: “As his life progressed, Washington would adhere to the stoic creed of governing one’s passions under the most adverse circumstances and facing the prospect of death with serenity.”

When Cato: A Tragedy was staged in England, both the Tories and the Whigs fell in love with it, vying to identify their party and their values with the main character. As Goodman and Soni remind us, Alexander Pope wrote that “Cato was not so much the wonder of Rome itself in his days as he is of Britain in ours,” while Voltaire called Cato “the greatest character that was brought upon any stage.” When Addison’s play reached America, it became a success equaled only, much later on, by Arthur Miller’s Death of a Salesman. It was rich in aphorisms, which came to be regularly deployed by the likes of Benjamin Franklin and John Adams, among others.

In 1720 a series of anonymous letters began to appear in the London Journal, signed only “Cato.” An example reads: “Thus it is that liberty is almost everywhere lost: Her foes are artful, united and diligent: Her defenders are few, disunited, and inactive. … This passion for liberty in men, and their possession of it, is of that efficacy and importance, that it seems the parent of all the virtues.” The 144 letters by “Cato” became a best-seller, popularizing ideas about natural rights and limited government. It is in reference to those letters that the libertarian think tank, the Cato Institute, is named.

In 1728 the opera Catone in Utica was presented at the Teatro delle Dame in Rome, though the initial reaction was negative because of the grizzly, prolonged scene portraying Cato’s death. The librettist, Pietro Metastasio, ended up rewriting that scene and having Cato die off stage.

And so we get to our own days, when Cato the Younger is still, more than two thousand years after his death, a looming figure in Western history, and of course a renewed role model for new generations of Stoics. We don’t simply accept the myth, we are interested in the real man, because — not in spite — of his failings. All Stoics are failed Stoics, say Goodman and Soni in their biography, though a better way to put it is: all Stoics are students and practitioners, not Sages. And that goes for Cato as well.

4 thoughts on “The Cato chronicles, part VI: the legacy”