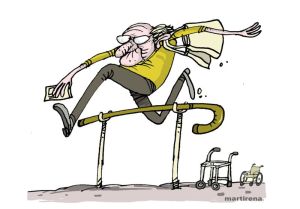 The 26th letter written by Seneca to his friend Lucilius begins in this fashion:

“I give thanks to myself, in your presence, that I do not sense any impairment in my mind, even though I do in my body. Only my faults have grown old, and those parts of me that pay service to my faults.” (XXVI.1-2)

When he wrote his letters Seneca was living the last years of his life, and even though he had of course no knowledge that those years would come to an abrupt end once the order to commit suicide had been delivered by Nero’s guards, he felt it in his bones. Still, he is thankful that his mind is still sharp, even though his body is decaying, as befits a Stoic who puts premium on his faculty of judgment and considers the body a preferred indifferent. I find it endearing that Seneca immediately mentions his faults, that persist because there are parts of him that keep paying service to them. We try to become better people, but we are still very fallible humans.

“My mind tells me to ponder the matter and to discern what of my tranquility and moderate habits I owe to wisdom and what to my time of life; also, to distinguish carefully between things I cannot do and things I do not want to do.” (XXVI.3)

This is a dense passage, addressing two separate issues. The first one is the open question of how much his serenity of mind and temperance of habit is the result of his own efforts at becoming more virtuous, or simply of the fact that he is getting old. The answer, for most of us, is probably an inextricable combination of the two, though there certainly are examples of old people who are neither serene nor temperate.

The second part is a reminder to himself of a version of the dichotomy of control: some things are simply not in our power, so we don’t get to take credit for not doing them. What we should focus instead is on the bits that are under our control, because we are definitely responsible for those. This is the virtue of practical wisdom, or phronesis in Greek (and prudentia in Latin): it is the knowledge of good and evil, and specifically the knowledge that the only truly good and truly evil things are those that fall under our control. Our own correct judgments are the only good (for us), and our own incorrect judgments are the only evil (for us).

“It is a very big problem, you say, for a person to wither and perish and — if I may speak accurately — to melt away. For we are not knocked flat all at once; rather, we waste away a little at a time, as each day erodes our strength.” (XXVI.4)

A quick and sudden death is easy and preferable, but the reality is that most of us will decay slowly, losing both our physical and likely mental strength in the process. That’s the hard challenge of nearing the end, and that’s why how we approach death is the ultimate test of our character. How will we react to our increase dependency on others? Is it better to hang around until the very last minute, or walk through the open door, as Epictetus puts it, while we are still in control? Hence this interesting bit of self doubt:

“I am unafraid as I prepare myself for that day when the artifices and disguises will be stripped away and I shall make judgment of myself. Is it just brave talk, or do I mean what I say? Were they for real, those defiant words I spoke against fortune, or were they just theater — just acting a part?” (XXVI.5)

It’s good practice to ask ourselves the same question, not just about death, but about how we conduct ourselves every day: are we really trying, however imperfectly, to live the Stoic life, or is it just talk? As all Stoics, Seneca puts limited value in theoretical learning (as important as it is). The proof, as we say, is in the pudding:

“Lectures and learned seminars and sayings culled from the teachings of philosophers and educated conversation do not reveal the mind’s real strength. For speech is bold even where the speaker is among the most timorous. What you have achieved will be revealed only when you breathe your last.” (XXVI.6)

Setting aside the substance of what Seneca is saying here, let’s pause for a second to appreciate the beauty of his writing. This why pretty much all translations of Seneca are good, because it is almost impossible to botch the job when one is served with such astounding prose.

“You are younger than I, but what does it matter? Years are not given out by quota. There’s no way to know the point where death lies waiting for you, so you must wait for death at every point.” (XXVI.7)

This is a crucial, and so commonly underappreciated point. We often speak of someone dying “prematurely” if they die young, or even young-ish. But we based that on statistical expectations. From the point of view of the Logos, the cosmic web of cause and effect, there is no such thing as too early or too late. Things happen when they happen. And this bit of theoretical understanding has the potential to be of enormous practical interest, if we internalize the thought and act accordingly: do not waste time, for the simple reason that you don’t know how much of a reserve you have in the bank.

Seneca then quotes the archrival Epicurus, who tells us to “rehearse for death.” Seneca explains to his friend that this is really an injunction to rehearse for freedom, because death is freedom from the shackles imposed by life on our bodies and minds. Life itself is a preferred indifferent, for the Stoic, and too much love of life is not a good thing, as it can lead us to act unvirtuously. Which explains the concluding words of the letter:

“There is but one chain that binds us: the love of life. That, admittedly, we may not discard; yet we must lessen it.” (XXVI.9)

10 thoughts on “Seneca to Lucilius: old age and death”