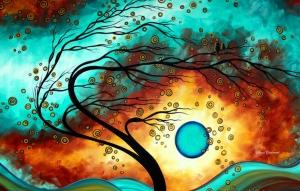 Letter XXIII of Seneca to his friend Lucilius dwells on a distinction between false and true joy, one that is well worth discussing because it tells us something interesting about Stoicism and emotions. (For my ongoing commentary on the Letters, see here.)

Seneca begins by telling Lucilius that he wishes to write to him about things that matter, not waste time chatting about the weather or the other trivialities that people talk about when they have nothing to say. He then gets straight to the point:

“Do you ask what is the foundation of a sound mind? It is, not to find joy in useless things. I said that it was the foundation; it is really the pinnacle. We have reached the heights if we know what it is that we find joy in and if we have not placed our happiness in the control of externals.” (XXIII.1-2)

This, of course, is one rendition of the Stoic dichotomy of control: we do not control externals, so it is foolish to stake our happiness on them. Seneca’s turn of phrase, “I said that it was the foundation, it is really the pinnacle” actually highlights the idea that finding joy in the soundness of one’s own judgments, as opposed to the acquisition of externals, is a major goal of Stoic training, and indeed the pinnacle one can achieve thanks to such training.

We can therefore make sense of a phrase from this letter that seems otherwise entirely out of character and slightly oxymoronic:

“Above all, my dear Lucilius, make this your business: learn how to feel joy.” (XXIII.3)

Normally, we don’t have to learn how to feel joy. It is a natural human emotion that arises in response to certain situations, like accomplishing a goal, reuniting with a friend, or even winning the lottery. The fact that we have to “learn” how to feel joy, however, is perfectly in agreement with the Stoic tenet that basic feelings (proto-passions, to use their terminology) are value neutral and should be evaluated by our faculty of judgment, which has the power to give or withdraw assent to such feelings. It is the resulting cognitively informed emotion that can be appropriate or inappropriate.

Of course, training oneself to feel the right kind of joy is difficult, just as it is difficult to come up with real topics of conversations instead of falling back on weather and sports. But that is why Seneca writes:

“Real joy, believe me, is a stern matter. … It is just this joy, however, of which I would have you become the owner; for it will never fail you when once you have found its source.“ (XXIII.4)

Seneca here is making a promise similar to the one that Epictetus makes in the first section of the Enchiridion (see my discussion here). The desirable outcome is achievable if one sets aside the things that glitter on the surface, as Seneca puts it, and go instead for the real gold, the one that takes work to bring to the light. One example is our own body:

“The frail body, also, even though we can accomplish nothing without it, is to be regarded as necessary rather than as important; it involves us in vain pleasures, short-lived, and soon to be regretted, which, unless they are reined in by extreme self-control, will be transformed into the opposite. This is what I mean: pleasure, unless it has been kept within bounds, tends to rush headlong into the abyss of sorrow.” (XXIII.6)

This sounds pretty stern, but not so much by the standard of Roman Stoicism (which, I maintain, was significantly more stern then its Greek forerunner). Seneca is admitting that pleasure is a good thing (in the sense of a preferred indifferent, obviously), but he is also warning his friend that it has a tendency to take over, distracting us from more important pursuits. What pursuits, exactly? Here comes the answer:

“Do you ask me what this real good is, and whence it derives? I will tell you: it comes from a good conscience, from honourable purposes, from right actions, from contempt of the gifts of chance, from an even and calm way of living which treads but one path.” (XXIII.7)

That would be, of course, the path of virtue. If all of this sounds way too preachy and heavy, just ask yourself the following simple question: if you had to choose between a life of moderate pleasures and modest means, but lived honestly while doing right by your friends and family, and one of incredible riches, but bought at the price of the suffering of others, which would you pick? If you go for the latter, you are not just clearly un-Stoic, you are simply not a very pleasant human being. Because that is, fundamentally, what Seneca and the Stoics were getting at: what kind of life is worth living, in the sense of an existence one is justifiably proud of by the time one lies on his death bed? There are several different answers to this question (for instance, the Epicurean one), but some of those answers are deemed unacceptable by pretty much any philosophy or religion one cares to mention, not just Stoicism.

The problem is that it takes many of us a long time to realize this, and some of us never quite get it. Which is why Seneca concludes the letter with these memorable words:

“Some men, indeed, only begin to live when it is time for them to leave off living. … Some men have left off living before they have begun.“ (XXIII.11)

5 thoughts on “Seneca to Lucilius: on the true joy which comes from philosophy”