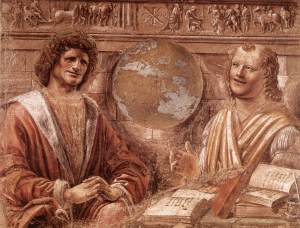 The Stoics referred to themselves as “Socratic,” thus publicly acknowledging the direct connection between their philosophy and the one developed by the Athenian sage. For instance, the idea that wisdom if the chief good — because it is the only thing that is always good, and in fact the one that allows us to use other things (such as wealth, education, etc.) well — is defended by Socrates in the Euthydemus.

But the Stoics were also greatly influenced, especially in their metaphysics, by one of the most mysterious pre-Socratic philosophers: Heraclitus of Ephesus. Much of what we know of Heraclitus is from Diogenes Laertius (at the beginning of book IX of the Lives and Opinions of the Eminent Philosophers). Diogenes tells us that “Heraclitus, [who was the] son of Bloson or, according to some, of Heracon, was a native of Ephesus. He flourished in the 69th Olympiad,” i.e., around 504-501 BCE. We are told that he lived until the age of 60, probably dying of dropsy.

Apparently, Heraclitus was a bit of a misanthrope, not liking either the Athenians or his own fellow Ephesians. Diogenes says that “he would retire to the temple of Artemis and play at knuckle-bones with the boys; and when the Ephesians stood round him and looked on, ‘Why, you rascals,’ he said, ‘are you astonished? Is it not better to do this than to take part in your civil life?’” This enmity was the result of the fact that the Ephesians banished a friend of Heraclitus, Hermodorus, whom he considered “the worthiest man among them.”

Heraclitus was born into an aristocratic family, and actually abdicated his right to be king in favor of his brother (though he would have been “king” within the limits imposed by the Persian empire, of which Ephesus was part at the time). He educated himself through a sort of self-applied Socratic inquiry, and when he was young claimed — like Socrates later on — not to know anything (though, unlike Socrates, he later believed to have learned a lot).

His major work was apparently entitled On Nature, and it consisted of three parts, devoted to the nature of the universe, politics, and theology. His writings were not very clear, apparently on purpose. Diogenes tells us that “he deliberately made it the more obscure in order that none but adepts should approach it, and lest familiarity should breed contempt.” This is consistent with a saying that Diogenes attributes to Heraclitus: “Much learning does not teach understanding.” This confusion between (rote) learning and actual understanding, or between knowledge and wisdom, is very much alive today, unfortunately, though I don’t prescribe obfuscatory writing as a cure…

“We ought therefore to bring ourselves into such a state of mind that all the vices of the vulgar may not appear hateful to us, but merely ridiculous, and we should imitate Democritus rather than Heraclitus. The latter of these, whenever he appeared in public, used to weep, the former to laugh.” (On Tranquillity of Mind, XV)

There are several obvious influences of Heraclitus on the Stoics. To begin with, he was among the first known authors to talk about the Logos, and “the idea that all things come to pass in accordance with this Logos.” There may have been also a connection with the famous Stoic notion of living according to nature: “it is necessary to follow what is common. But although the Logos is common, most people live as if they had their own private understanding.” This sounds a lot like the idea that we should live by following our nature and the nature of the cosmos, developed already by the early Stoics, contrasted with the notion that most people don’t realize this — which necessitates Stoic training, of the type for instance offered by Epictetus.

Heraclitus identified the Logos with the fire, the generative principle of the cosmos, and interestingly, the early Christians also adopted the Heraclitean Logos, incorporating it into their theology. In particular, Hippolytus, in the III century, identified it with the Christian Word of God.

In terms of ethics, Heraclitus famously said that “character is fate,” a phrase that has been interpreted in a variety of ways, but generally as meaning that character is the most important aspect of a person, what sets us apart from other animals. Needless to say, the Stoics built their entire philosophy of life on the concept of character and the possibility of its improvement through the practice of the cardinal virtues.

Perhaps the most famous of Heraclitus’ utterances is panta rhei, everything flows, or “ever-newer waters flow on those who step into the same rivers,” rendered also as “everything changes and nothing remains still … you cannot step twice into the same stream.” In this respect too Heraclitus is opposed to Democritus: the latter espoused an ontology of objects, forerunner of what nowadays in philosophy is referred to as substance metaphysics. Heraclitus’ approach, by contrast, eventually led to the modern, currently cutting edge, process metaphysics. It is possible to see similarities between the concept of panta rhei and the Buddhist doctrine of impermanence, and the image of the flowing river recurs also in the 13th century Japanese tale of Hōjōki — which in fact refers to Buddhist impermanence.

Heraclitus was influential on Plato (who, however, vehemently disagreed with his doctrines), the Christians, and, most germane to us here, the Stoics. Anthony Long points out the fact that the pre-Socratic is often mentioned by Marcus Aurelius, for instance here:

“Remember Heraclitus: ‘When earth dies, it becomes water; water, air; air, fire; and back to the beginning.’ ‘Those who have forgotten where the road leads.’ ‘They are at odds with what is all around them’ — the all-directing Logos. And ‘they find alien what they meet with every day.’ ‘Our words and actions should not be like those of sleepers’ (for we act and speak in dreams as well) ‘or of children copying their parents’ — doing and saying only what we have been told.” (Meditations, IV.46)

But we find him also in Epictetus, who actually connects Heraclitus with the close philosophical kins of the Stoics, the Cynics:

“Remember that you should behave in life as you do at a banquet. Something is being passed around and arrives in front of you: reach out your hand and take your share politely. It passes: don’t try to hold it back. It has yet to reach you: don’t project your desire towards it, but wait until it arrives in front of you. … For it was by acting in such a way that Diogenes [the Cynic], and Heraclitus, and others like them, deservedly became divine and were called so.” (Enchiridion, XV)

8 thoughts on “Heraclitus, the weeping philosopher”