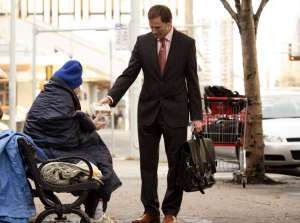 S. wrote: I have a question I’ve been asking myself for quite a few years now, even prior to getting into Stoicism. We’ve all probably had instances where, for example, we are unsure about whether we are giving aid to the homeless out of true virtue, or whether we simply enjoy thinking ourselves as such (and for some people more importantly, that others see us as such).

So my wife and I budget ourselves $30/week of personal spending money but I typically don’t use it because I try not to eat out or buy things that I don’t feel I need. One thing I like to do is give the random grocery bagger, cashier, or whomever I may encounter that has engaged in small talk with me a $5, $10, or $20 bill. Whatever is in my pocket at the time or what I deem reasonable for the situation. Even as I’m writing this I realize it makes me feel good just thinking that people are reading it and seeing it as a nice thing to do, and therefore I don’t usually tell anyone about these things. I don’t even tell my wife, because I feel like by telling her I am giving into that will for recognition of my act. What are your thoughts on this? Would you find it any less virtuous by telling your wife?

I see the man that I want to be, but I know I’m nowhere near that goal. I have that self-deprecating personality that makes it hard for me to feel justified in recognition where it isn’t deserved.

This is somewhat related to the issue we just discussed recently, concerning the ethical advisability of engaging in so-called effective altruism, although what you are referring to here is on a much smaller, and more personal (because it concerns people you actually meet) scale.

I don’t think there is anything objectionable in giving small amounts of money to homeless people you encounter, or to the others in need you mention in your letter. I also don’t think it is wrong to donate to charity in larger amounts. I do both, so it would be hypocritical of me to advice others not to do it. In my case, I keep small bills in my pocket to give out to homeless people I encounter in my neighborhood, and I budget a certain amount every few months to give to charities or other organizations whose mission I believe in (mostly, the International Rescue Committee, for disaster relief; and the ACLU, for increasingly needed protection of civil rights; also some news organizations, since a more or less free press is vital to maintain a somewhat functional democracy).

I do this because I want to contribute to a world were human beings help each other and relate to each other as members of a cosmopolis, as Marcus says here:

“The universal nature has made rational animals for the sake of one another to help one another according to their deserts, but in no way to injure one another.” (Meditations, IX.1)

“Where the end is, there also is the advantage and the good of each thing. Now the good for the reasonable animal is society.” (Meditations V.16)

You also raise the issue of whether one does this sort of things in order to feel good about oneself, and whether that is in itself ethical. So long as feeling good isn’t the main reason one engages in a virtuous act, I don’t think there is a problem. Kant thought that feeling good about doing good somehow makes the act not good, but he was a bit of a rigid moralist, who also incidentally said that the moral law ought to be upheld even at the cost of the destruction of the world (one could reasonably wonder what the point of being ethical would be, if the world came to an end as a result of it). Here is what Seneca has to say instead, which I find to be a much wiser discussion of the issue:

“We Stoics … take pleasure in bestowing benefits, even though they cost us labour, provided that they lighten the labours of others.” (On Benefits, IV.13)

And more to the point:

“‘But,’ says our adversary [the Epicurean], ‘you yourself only practise virtue because you hope to obtain some pleasure from it.’ In the first place, even though virtue may afford us pleasure, still we do not seek after her on that account: for she does not bestow this, but bestows this to boot, nor is this the end for which she labours, but her labour wins this also, although it be directed to another end. … Pleasure is not the reward or the cause of virtue, but comes in addition to it; nor do we choose virtue because she gives us pleasure, but she gives us pleasure also if we choose her.” (On the Happy Life, IX)

So, you may still not want to boast about your actions to your wife, but taking pleasure in doing something good is human, and you shouldn’t beat yourself up for it.

The broader issue, however, is the same that I brought up in my criticism of effective altruism: we need to be careful not to use charity as a palliative that clears our conscience and distracts us from the underlying issues. We live in a rich society with plenty of resources, we have no excuse for having homeless people in the streets, or for so many in our society to have to work two or three jobs just to pay their rent.

That is why I only give little directly to the person I encounter in the street, but reserve some of my budget to give money to organizations that advocate for the homeless, or that fight for a more just society. And of course I also engage whoever will listen in conversations about social justice, and I vote for political candidates who support more just policies. Naturally, ultimately I do not control the outcomes of these actions, only my judgments and my own actions following from those judgments. Accordingly, I don’t expect the world to magically become a better place, but try to follow Marcus when he says:

“Do what is necessary, and whatever the reason of a social animal naturally requires, and as it requires.” (Meditations IV.24)

14 thoughts on “Stoic advice: giving to the homeless”