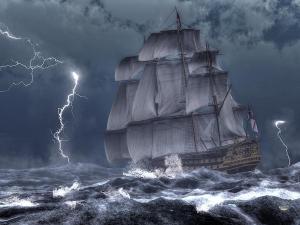 Ship in a storm, by Daniel Eskridge

There is a famous story told by Aulus Gellius, of a Stoic philosopher who finds himself aboard a ship in the midst of a severe storm. While he does not scream or cries, he shows all the outwardly signs of being emotionally disturbed: he is pale, he trembles, and his expression is one of alarm. Once the storm passes, Aulus asks the philosopher how come his Stoicism did not preclude such reactions? Isn’t that what his school teaches? Not at all, responds the philosopher, and gets out his copy of Epictetus’ Discourses, from which he quotes, in part:

“When some terrifying sound occurs, either from the sky or from the collapse of a building or as the sudden herald of some danger, even the wise person’s mind necessarily responds and is contracted and grows pale for a little while, not because he opines that something evil is at hand, but by certain rapid and unplanned movements antecedent to the office of intellect and reason. Shortly, however, the wise person in that situation ‘withholds assent’ from those terrifying mental impressions; he spurns and rejects them and does not think that there is anything in them which he should fear.” (Fragments, IX)

Margaret Graver begins in this way the fourth chapter of her Stoicism and Emotion, which I am commenting on in this series of posts. The idea expressed by Epictetus is crucial to understand the Stoic theory of emotions. The initial mental impression (phantasia, in Greek) is an inevitable component of human affective responses, and the point of Stoic training is certainly not to try to achieve the impossible. The bit that is morally significant is not whether one experiences the impression, but how one reacts to it, and specifically whether one actually judges that there is an evil is at hand. Before that point one has what Graver calls a pre-emotion, a good rendition of the Greek propatheia.

A similar treatment of the emotions is actually found in Aristotle, and — among the early Stoics — in Chrysippus:

“People who are weeping stop, and people weep when they do not want to, when the impressions created by underlying facts are similar, and there is either some impediment or no impediment. For it is reasonable that in such cases [i.e., those of involuntary weeping] something happens similar to the way that the cessation of weeping and lamentation come to pass, but rather in the beginnings of the circumstances bringing about the movement.” (cited in Galen, The Doctrines of Hippocrates and Plato IV.7.16-17)

The point is that the simple fact that people are weeping (or laughing, for that matter) should not be taken to be evidence of a fully formed emotion, because people may start weeping suddenly, in response to an external stimulus, even though they are not actually grieving, or stop weeping when they are distracted by something else, even though they are, in fact, grieving. Proper distress, for the Stoics, is volitional, because it is dependent on judgment.

Margaret observes that this view that feelings sometimes occur in the absence of assent is most fully developed, in the Stoic literature, by Seneca, particularly in On Anger. According to Seneca, anger is a high-level response, which requires not just the impression that an injury has been received, but the additional assent to such impression:

“We hold that anger dares nothing on its own; rather, it comes about with the mind giving its approval. For to gain an impression of injury received, and conceive a desire for revenge, and to link together the two ideas that one ought not to have been wronged and that one ought to take revenge-none of this is characteristic of that impulse that is stirred involuntarily.” (On Anger II.1.4)

Why is this? Because anger, fear, and other emotions depend on our believing certain things. For instance, a person isn’t really angry unless they believe they have been injured in some way: to be angry is to believe that a particular person knowingly did something bad to you which you didn’t deserve. That sort of belief is complicated; it relies on concepts like personhood, intention, and fairness. While some reactions really are involuntary — a rush of adrenalin, as we say, or jumping at a loud noise — it wouldn’t be plausible to say that a truly involuntary reaction can include all of that belief-content. So the Stoics need a lesser term for the kind of reaction that might have some of the physiological characteristics of emotion but doesn’t include the characteristic beliefs. Their word for the lesser reaction is “pre-emotion.” As Graver points out later on, in the course of her lengthy and careful exegesis of Seneca’s On Anger, the crucial distinction to the Stoics is between assent, which is the most crucial function of the rational mind (see here) and the ability to receive impressions, which we share with the rest of the animal world. Indeed, Seneca provides a long and at first sight haphazard list of examples of situations that appear to be anger but are not. What the items on the list have in common is that they are all feelings that do not depend on assent, and for which, therefore, the individual experiencing is not morally responsible. But he is human, so he will experience them just the same:

“For natural faults of body or mind are not removed by any amount of wisdom: what is innate and implanted may be mitigated by treatment, but not overcome. … Some people have lively, energetic blood that rises swiftly to their faces. This is not cast out by any amount of wisdom; if it were, if wisdom could erase all a person’s faults, then wisdom would have nature itself in charge.” (Letters to Lucilius, XI)

“Lest it should seem that what we call virtue strays outside the natural order, the wise person will tremble and feel pain and grow pale, for all these things are feelings of the body.” (Letters to Lucilius, LXXV)

In Letter IC, Seneca even explains that sometimes even the wise person weeps involuntarily, for instance suddenly at a funeral, and at other times voluntarily, when remembering a loved one who passed away. Contra to common misunderstanding in modern times — not to mention popular caricatures of Stoicism — our philosophy is not a magic bullet that will make you invincible, or impervious to the basic feelings associated with the human condition. It is, rather, an attempt to analyze that human condition and to derive best practices for living it in the best way possible that is actually accessible by members of our species.

Margaret’s chapter ends with an interesting discussion of the same concepts as found in the Jewish scholar Philo of Alexandria, as well as in the exegetical writings of the Christian Origen. Philo is concern with the interpretation of Genesis and Exodus in the Old Testament, for instance presenting Abraham as not really mourning Sarah — in the standard sense of the term — but rather behaving a bit like a Stoic sage. His concern, like that of the Stoics, is to explain what Scripture says about Abraham (“he came there to mourn”) in a way that allows Abraham to still be the wisest of all human beings. Similarly, Origen — who was familiar both with Philo and with actual Stoic sources — is concerned with interpreting some apparent emotional reactions displayed by Jesus as propatheia, or pre-emotions. In other words, it won’t do for these two authors to allow a possible interpretation of either Abraham or Jesus as affected by what the Stoics would characterize as unhealthy emotions, hard to reconcile with the wisdom of a prophet and the character of a god. It seems, then, the the concept of pre-emotion was instrumental in allowing the Stoic theory of emotions to be taken seriously by many in the ancient world, including their later rival, the Christians.

7 thoughts on “Stoicism and Emotion, IV: feelings without assent”