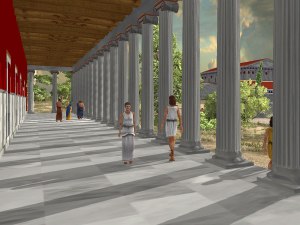 We have arrived at the end of my extended commentary of Larry Becker’s A New Stoicism. Let me stress one more time that this is the book to read if one is seriously interested in a philosophically coherent update of Stoicism for the 21st century. There is absolutely nothing else like it, period. It is, however, a difficult book to get through, especially the extensive commentaries at the end of each chapter, not to mention the appendix devoted to a presentation of a Stoic system of formal normative logic. That is precisely why, with Larry’s approval and help, I wrote these ten posts. Needless to say, the reader will be well served to use this collection as a guide, not a substitute, for reading the actual book.

That said, time now to tackle the last bit, an important postscript to the revised edition of A New Stoicism, which deals with three important topics that Larry had left out of the first edition, and did not feel would fit organically within the main text of the second one: the relationship between Stoicism and virtue ethics more generally; the question of whether a eudaimonic philosophy like Stoicism has enough to say about social and political philosophy; and why Stoicism has a lot to contribute to practical living in modern times. I will summarize and briefly comment on each of these topics, though I wish Larry had devoted significantly more space to them. Next book, perhaps.

Virtue ethics has seen a renaissance in moral philosophy ever since the work of Elizabeth Anscombe, Philippa Foot, Bernard Williams, and Alasdair MacIntyre, among others (see this nice summary). That is because it provides a valuable alternative to the two dominant modern approaches: Kantian deontology and utilitarianism (in their many varieties, see this article by John-Stewart Gordon for a discussion). But plenty of people have noted issues with the chief version of modern virtue ethics, which is based on Aristotle. In particular, its foundation on a teleological view of human nature that is no longer tenable according to modern science (see this video discussion with my colleague Dan Kaufman).

While it is true that the ancient Stoics in turn relied on a “providential” view of the cosmos rooted in their pantheism, two major differences with Aristotelianism make Stoicism a far more palatable candidate for a modernized virtue ethics: (i) the ancient Stoics themselves clearly saw that the specific details of their metaphysics were ultimately irrelevant to the question of how to live their lives (see here, for instance); and (ii) Stoicism provides a thoroughly naturalistic account of ethics, based on the so-called cradle argument which we have already discussed, and which turns out to be eminently compatible with the findings of modern cognitive psychology. This leads Larry to write:

“Ethical theory makes a great deal of sense to me when it is grounded in the reality of the human condition and our developing understanding of the physical and social environments we inhabit. It makes much less sense when it is done a priori or tethered only to our intuitions.” (p. 226)

One area I’m going to respectfully disagree with Becker is toward the end of this first section of the postscript, where he hints at the possibility that virtue ethics, particularly Stoic virtue ethics, might provide us with a framework capable of unifying the three major traditions in moral philosophy:

Well, yes. But I’m pretty sure both utilitarians and deontologists would recoil in horror at the suggestion! And, I think, for good reasons. Even though Larry is here magnanimously stating that virtue ethics would provide a unifying approach “without definitely subordinating one type [of moral philosophy] to the others,” it seems to me that it is (Stoic) virtue ethics that would do the unifying, and that such a feat would be made possible by a focus on virtuous agency, thus implicitly putting virtue ethics at the forefront of the allegedly egalitarian solution. I don’t think this really matters a lot, though. The point, which is well taken and should be kept in mind by critics of virtue ethics, is that our approach of course includes both deontological components (because we recognize duties toward others) and utilitarian ones (because we are concerned with the consequences of our action). But the central focus remains on the improvement of our own character, as the surest way to contribute to the betterment of the human polis.

One of the most persistent (and frustrating, if your Stoic progress is not sufficiently advanced) objections to Stoicism is that it has no concern, or provides us with no tools, for social and political philosophy. The philosophy is too vague, or individualistic, or even egoistic, say the critics. And this despite a significant literature to the contrary.

An obvious observation that should address these concerns a bit is that one of the four Stoic virtues is that of justice, connected to Epictetus’ discipline of action — which is meant explicitly to regulate our interactions with others in a just way. As Larry puts it:

“From Socrates onward, it has been argued that those virtues [like justice] defeat radical amoralists like Thrasymachus in Plato’s Republic and ground strong political duties that involve self-sacrifice for the good of one’s family, neighbors, and fellow citizens.” (p. 228)

In the modern parlance developed by Becker throughout the book, strong agency, virtue and eudaimonia are tightly interrelated (see here), so that a Stoic simply cannot go through her life by exercising virtue only for her own sake, it automatically includes regard for others. This is a consequence, again, of the cradle argument referenced above, which is often presented in terms of oikeiôsis, the gradual “appropriation” of others’ concerns that is the basis for Stoic cosmopolitanism (see here).

One thing I need to add to Larry’s treatment here, and on which I hope to expand soon in a forthcoming post. I don’t think Stoicism entails a particular type of social philosophy (say, liberal progressivism), though it is incompatible with a number of them (no Stoic Nazis!). As usual, people will say that that’s a bug, and I respond that it is a feature. I don’t see why liberal progressives (among whom I count myself) should be the only virtuous political agents around. I think one can be a virtuous conservative, libertarian, and a number of other things. Specific solutions to social-political issues will come, as Becker clearly states, from the virtuous application of practical reason. And no particular ideological group has a monopoly on that.

Stoicism as a guide to living well

Finally, Larry tackles the recent growth (which mostly happened after the first edition of A New Stoicism, back in 1998) of the modern Stoicism movement, which has resulted in widespread interest in Stoicism as a practical philosophy for the 21st century — and which is the raison d’être of this very blog.

He mentions a number of available resources for those interested in learning and practicing Stoicism, including — very kindly — my own How To Be A Stoic: Using Ancient Philosophy to Live a Modern life (but also books by Don Robertson, Bill Irvine, Chris Gill, and even Tom Wolfe’s 1998 novel, A Man in Full, whose main character turns around his life through the discovery of Stoicism).

Interestingly, Becker then turns to one of the underestimated ancient Stoics, Panaetius, an exponent of the so-called Middle Stoa and Posidonius’ teacher (the latter, in turn, was Cicero’s teacher, which is why Cicero wrote a lot, and sympathetically, about Stoicism). The reason for the neglect is that we only have fragments of Panaetius’ writings, but one of the important ones comes from Cicero’s On Duties. That’s the bit where Cicero presents Panaetius’ theory of ethical social roles, and it is worth considering as a possible framework for modern living as well (here is my summary of Brian Johnson’s treatment of the other major theory of roles in Stoic ethics, the one articulated by Epictetus).

Cicero summarizes the four roles in this fashion:

“It should also be understood that nature has endowed us with two roles, as it were. One of these is universal, from the fact that we all share in reason and that status which raises us above the beasts. … The second role is the one which has been specifically assigned to individuals. … To the above-mentioned two roles, a third is appended, which some chance or circumstance imposes; and a fourth as well, which we take upon ourselves by our own decision.” (On duties 1.107, 110–11, 114–17)

Long and Sedley, in their The Hellenistic Philosophers (sec. 66, at E), explain:

“[It is] Panaetius’ almost certainly original doctrine that proper functions are specifiable by reference to ‘four roles’ which each person has. … The word translated ‘role’ is persona (the Latin for an actor’s mask), and Panaetius’ theory intriguingly anticipates modern conceptions of personality and role play. Roles one and two refer respectively to the shared rationality of all human beings (‘universal nature’) and the physical, mental and temperamental nature of the individual. … Equally impressive is the clarity with which he distinguishes the entirely accidental determinants of personal identity (role three) from the career and specializations people choose for themselves (role four). … Collectively the four roles offer an account of the general considerations people should review in deciding on their proper functions — what I ought to do as a member of the human race, as the person with my natural strengths and weaknesses, as unavoidably involved in these external circumstances, and with the lifestyle and bent I have chosen for myself.”

Larry’s postscript ends with a brief but illuminating discussion of the relationship among Stoic teaching, training, and “therapy,” as well as their joint consequences on the idea of Stoic moral education. Stoic teaching should consist of presenting to students the three classical fields (physics, logic, and ethics), to emphasize how coherent and attractive Stoic philosophy really is. Stoic teaching should also include an outline and justification of our ideas on the development and structure of virtue.

In terms of training, this includes the application of principles and precepts to hypothetical and actual cases, along the model presented by Epictetus’ Discourses. A second aspect of Stoic training should comprise the mental as well as physical rehearsal of one’s activities, including such things as the evening philosophical diary as well as exercises in self-denial (see here for a list and discussion of practical Stoic exercises).

Finally, addressing Stoic therapy, Larry correctly points out that to talk in those terms is actually somewhat problematic. If someone suffers from organic problems that affect one’s mentation, then philosophy isn’t going to do it, one needs psychological or even psychiatric help (see this discussion). Of course, as I’ve argued on several occasions, philosophy and therapy may be complementary, and a prokopton may prefer, if she needs therapy, a cognitive approach inspired by Stoic insights, such as REBT and CBT. Whatever one does, once the therapy has succeeded in putting out, or at least controlling, whatever fire was raging in one’s mind, one still needs a compass to navigate life in a eudaimonic fashion. And Stoicism has been the best compass around for more than two millennia.