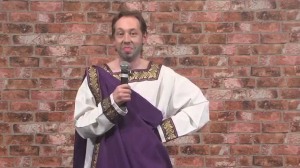 Stoicism is, notoriously, associated with the suppression of emotions and going through life with a stiff upper lip. And with the lack of a sense of humor. Can you imagine Mr. Spock from Star Trek, the stereotypical Stoic, laughing at a joke (well, at least when he is not under alien influence, or something like that)? There is far more chance of Captain Kirk not kissing a female, whether alien or not (an almost impossibility) than Spock displaying a sense of humor.

And yet, Stoics both ancient and modern seem to prefer to laugh at the universe, and indeed to think that’s a far better attitude than crying over it. Consider Seneca, in On Tranquillity:

“We ought therefore to bring ourselves into such a state of mind that all the vices of the vulgar may not appear hateful to us, but merely ridiculous, and we should imitate Democritus rather than Heraclitus. The latter of these, whenever he appeared in public, used to weep, the former to laugh: the one thought all human doings to be follies, the other thought them to be miseries. We must take a higher view of all things, and bear with them more easily: it better becomes a man to scoff at life than to lament over it. Add to this that he who laughs at the human race deserves better of it than he who mourns for it, for the former leaves it some good hopes of improvement, while the latter stupidly weeps over what he has given up all hopes of mending. He who after surveying the universe cannot control his laughter shows, too, a greater mind than he who cannot restrain his tears, because his mind is only affected in the slightest possible degree, and he does not think that any part of all this apparatus is either important, or serious, or unhappy.” (15)

The “vulgar” here are people not practicing philosophy, and as slightly elitist as Seneca sounds, his point is well put, especially in the second part of the quote: it takes a better sense of things to laugh, rather than to cry, at the absurdity of the universe. Or as Mel Brooks famously put it, “humor is just another defense against the universe.”

One of my favorite sources of (dark) Stoic sense of humor is Epictetus:

“I have to die. If it is now, well then I die now; if later, then now I will take my lunch, since the hour for lunch has arrived — and dying I will tend to later.” (Discourses I, 1.32)

“‘But I get to wear a crown of gold.’ If you have your heart set on wearing crowns, why not make one out of roses — you will look even more elegant in that.” (Discourses I, 19.29)

Here is another one, which Epictetus attributes to Paconius Agrippinus, a Stoic philosopher and Roman statesman:

“Once, when [Agrippinus] was preparing for lunch, a messenger arrived from Rome announcing that Nero had sentenced him to exile. Unflustered he replied, ‘Then why don’t we just move our lunch to Aricia.’” (Fragments 21)

This, of course, is rather dark humor, suited to the times and the situations in which these people lived and died. The argument has often being made that Stoicism, like Buddhism and other similar philosophies, thrive whenever times are tough and unpredictable. But as my friend Larry Becker put it in an soon to be published interview with the American Philosophical Association, times are always tough and unpredictable.

Speaking of Larry, I found inspiration in his dry humor as well. I wrote about how he has dealt with severe disability due to polio, throughout his life. When, at some point in his academic career, he had to face the reality of permanently needing a wheelchair, he reminded himself that the important projects in his life included his wife of 46 years and their life together, his profession as a scholar and teacher, and his commitment to society at large. But, as he drily added:

“Doing without a wheel chair is not a basic life goal.” (Larry Becker, presidential address to Post-Polio Health International)

And of course no account of Stoic humor can do without mentioning Michael Connell, the Stoic comedian. Here is a full 31-minute, very funny, show entirely based on Stoic principles, which I had the pleasure and honor to “concept” check, so to speak, on Michael’s behalf before it was released. But I’ll leave you with one of my favorite among his short videos, focusing on the fundamental Stoic idea that the only things that are good or bad are those under your control (i.e., your values, judgments, and decisions), everything else being a preferred or dispreferred indifferent. Enjoy, and use it the next time your train or plane is late…

3 thoughts on “Do the Stoics lack a sense of humor?”