What is the good life? The ancient Greeks referred to it as eudaimonia, which very unfortunately often gets translated into modern English as “happiness,” a vague concept that usually refers to a momentary feeling of pleasure. A closer rendition is “flourishing,” but I think an even better one is: the life that is truly worth living, i.e., the sort of life one may look back to on one’s death bed and think, yup, that was worth whatever pain accompanied it.

During the Hellenistic period — roughly from the death of Alexander the Great in 323 BCE to the Battle of Actium in 31 BCE, which marked Octavian Augustus’ ascent to power in Rome and the beginning of Empire — there was an explosion of philosophical schools, each with its own conception of eudaimonia. Let me remind you of the major ones and how they were related to the obvious pre-Hellenistic point of reference: Socrates. 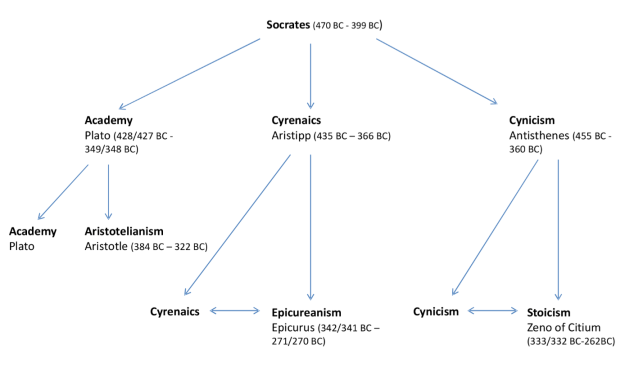 During the Hellenistic period the Platonic Academy was dominated by Skeptics (Carneades, for instance, though Cicero professed to be one as well), who didn’t really have much to say about the good life, for simple reason that they did not believe we have knowledge, and that consequently we should suspend judgment on all matters, including, coherently, what constitutes eudaimonia. The best Sextus Empiricus (a Pyrrhonian Skeptic) came up with was to recommend a life of detachment based on epistemic — not moral — reasons, talking little about virtue, and saying nothing about eudaimonia.

The Peripatetics, followers of Aristotle, by contrast, had a lot to say on the subject. They thought that the life worth living is the result of a combination of two factors: virtue and certain externals, such as health, wealth, education, and good looks — at least in some measure. This is rather commonsensical, but it also makes the approach somewhat elitist: if you don’t have a given level of externals you are screwed, no eudaimonia for you, buster!

Moving to the hedonistic branch, the Cyrenaics believed that the good life is achieved when one seeks physical pleasures in the moment. This still needs to be done virtuously, so that you own the pleasure, not the other way around. The Epicureans, however, valued mental pleasures (e.g., the company of friends) higher than physical ones, and at any rate for them eudaimonia consisted mostly in the absence of pain, both physical and especially mental. Hence their famous (or infamous) advice of withdrawing from social and political life, which is notoriously painful.

Finally, we move to the Cynic and Stoic branch. And here is the funny thing: there was no distinction between these two schools in terms of their view on eudaimonia. They both taught that virtue is necessary and sufficient to justify a life worth living. This means that anyone at all can be eudaimon: it doesn’t matter whether you are rich or poor, healthy or sick, educated or ignorant, handsome or ugly. How refreshing.

The big difference between the Cynics and the Stoics, of course, lies in their respective treatment of preferred and dispreferred indifferents, that is of externals. For the Cynics, they are to be avoided because they positively get in the way of virtue. Famously, Cynic philosophers did not own a house, had few other possessions, did not merry, and did not have children. The glaring exception was Crates, married to Hipparchia, and here is how Epictetus explains the anomaly:

“‘Yes, but Crates married.’ You’re referring to a special case in which the marriage was prompted by love, and you’re reckoning on a wife who was herself another Crates.” (Discourses III.22.76)

The Stoics, by contrast, acknowledged that people have needs and interests outside of virtue, and thought that this can be part of a eudaimonic life so long as externals are treated as indifferent, i.e., it’s fine if one has them, but it is not good to get attached to them. A fortiori, it is certainly not acceptable to obtain externals by compromising one’s virtue.

In a sense, then, the relationship between Cynics and Stoics can be understood as being similar to that between Buddhist monks and lay Buddhists, or between Catholic priests and nuns and lay Christians: the stricter version of the philosophy (Cynicism) is only for a few who are answering a call, while the accessible version (Stoicism) is for everyone else.

Indeed, Epictetus writes a whole chapter — Discourses III.22 — on Cynicism where he puts it essentially that way:

“So you too should consider this matter with proper care: it isn’t what you think it is. ‘I wear a rough cloak even now, and I’ll be wearing one then. I sleep on a hard bed now, and I’ll sleep on one then. I’ll take up a knapsack and staff, furthermore, and set off on my rounds, begging from those whom I meet, and abusing them. And if I see anyone pulling out his body hair, I’ll give him a scolding, and likewise if his hair is dressed too fussily, or he struts around in purple robes.’ If you picture the Cynic calling as being something like that, keep well away from it, don’t come near, because it is not for you.” (Discourses III.22.9-11)

Cynicism is hard work, and only suitable for the few that are capable of rising to the challenge. For the rest of us, a eudaimonic life that is focused on the improvement of our moral character but that allows — and yet, crucially, does not require or depend from — externals, is indeed the kind of life we will be able to look back to near the end and think: yup, that was worth it.

11 thoughts on “On the different conceptions of the good life”