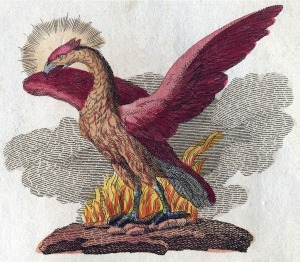 While discussing René Brouwer’s The Stoic Sage: The Early Stoics on Wisdom, Sagehood and Socrates (Cambridge Press), we have encountered the two Stoic definitions of wisdom: (i) “knowledge of human and divine matters,” and (ii) “fitting expertise.” In chapter 2, Brouwer turns to the issue of what happens when someone transitions into sagehood. A note of caution: according to Seneca, this event (if it occurs at all) is as rare as the mythical bird, the phoenix, i.e., it takes place every half millennium or so. The chances you’ll personally achieve sagehood, therefore, ain’t that high. Still, I think that if one is interested in Stoic philosophy this is a topic worth briefly discussing.

Plutarch (who was not particularly sympathetic to the Stoics, and whose writings need, therefore, be interpreted with caution) says in “How a man may become aware of his progress in wisdom,” with barely veiled sarcasm:

“The sage changes in a moment or a second of time from the lowest possible inferiority to an unsurpassable character of virtue; and all his vice, of which he has not over a long time succeeded in removing even a small part, he instantaneously flees forever.” (Stoicorum Veterum Fragmenta, 3.539).

If taken seriously, this makes the transition to sagehood sound very much like revelation for a Christian (say, on the way to Damascus), or enlightenment for a Buddhist, with the difference that the source of the Christian transformation is external, while for both Stoics and Buddhists it is internal. It is also irreversible, as I think it is in Buddhism, but not necessarily in Christianity (where one can lose one’s way; perhaps precisely because the transformation was triggered from the outside in the first place?).

Much of Brouwer’s discussion here is based on the Synopsis of “The Stoics talk More Paradoxically than the Poets,” again by Plutarch. According to Plutarch’s Synopsis, then, two things immediately characterize the transition to sagehood: its speed, and the fact that it is a change between opposite states (vice and virtue).

The Synopsis also states that the Sage may be ugly rather than beautiful, and a beggar rather than a rich king. So don’t expect wisdom to correspond to external attributes, such as beauty and wealth or power.

Moreover, the Sage does not hold “opinions,” meaning changeable convictions about whatever matters he contemplates. That is because he has reached the pinnacle of human epistemic power: he does not have superhuman knowledge, but does have the best knowledge any human being can possibly achieve. His cognition, so to speak, is stable. Needless to say, from a contemporary standpoint this is simply nonsense, and it should be abandoned by modern Stoics. There is no human ideal of knowledge because knowledge is always context-dependent, and moreover it encompasses far too much for a single human mind to actually hold and comprehend. On these bases alone we may conclude that Sagehood — if so defined — is not just rare, it is unachievable.

Interestingly, Plutarch says — and Brouwer confirms that this is found also in other ancient texts on the topic — that the Sage is not “like” Zeus, he actually is divine. As Sextus Empiricus puts it, in his non-Stoic friendly “Against the Professors” (7.423):

“According to them [i.e. the Stoics] the sage possesses an infallible criterion, which makes him in all respects divine because he never holds opinions, that is assents to what is false, wherein lies the height of unhappiness and the ruin of the inferior person.”

This may struck the modern reader as just bizarre, until we remember that the Stoics did not literally believe in the Olympian gods, as for them god was the same as nature itself. And human beings participate in the Logos, so they are, in a sense, divine. Brouwer again: “Chrysippus explains in allegorical fashion that not only the Olympian gods such as Zeus, Ares and Hephaistos are to be ‘assimilated’ to, respectively, reason that rules over everything, war or the principle of order and disorder, and fire, but also that the sun and moon are gods. What we thus seem to have is an interpretation of the gods of traditional religion in terms of natural phenomena and an interpretation of natural phenomena in terms of the divine.” Ancient Stoicism, in other words, was pantheistic.

A further characteristic of the transition to sagehood is its radical nature. That is because the ancient Stoics maintained that there is nothing between vice and virtue, and that all bad deeds are equal. (I commented on this strange idea before, in terms of the famous drowning man metaphor.) Another way to explain this is summarized by Brouwer in this fashion: “According to Chrysippus in his fourth book Ethical Questions [see Diogenes Laertius 7.120, SVF 3.356], just as it does not matter whether the pilgrim is a hundred or a few miles away from Canopus [a sanctuary in the Nile delta which flourished in the third century BCE], as they are both not in Canopus, so it does not matter whether one makes a big or a small mistake: in either case, one is not virtuous.”

Well yes, technically, but really, the only charitable interpretation we can give of this, and the only reason we may entertain retaining this notion in modern Stoicism, is as a call for humility, along the Christian lines of “we are all sinners.” If taken literally, the analogy has very little force.

What about logic and knowledge? As we have seen above, the transition to sagehood also means that the Sage no longer holds to mere opinions, he actually has knowledge based on stable cognition. But even this is open to dispute, as Brouwer reminds us of the famous (and actually useful, I think) analogy of the hand: “Zeno is said to have compared the open palm of his hand with an impression, the fingers of his hand a bit contracted with assent to the impression, his fingers made into a fist with a cognition and the tight and forceful gripping of his other hand over the fist with knowledge.” It’s a “handy” (literally!) reminder, worth spelling out in sequence:

Open palm = Impression
Contracted fingers = Assent to the impression
Fist = cognition (which, however, may be unstable, if one is not a Sage)
Other hand over fist = knowledge (i.e., stable cognition, typical only of the Sage)

Finally, there is yet another weird thing about the Stoic Sage: he may be unaware of actually having achieved sagehood! Philo of Alexandria writes:

“They say that it is impossible that those people who have reached the highest wisdom and touched upon its borders for the first time, know their own perfection; for the two things do not happen at the same time, namely the arrival at the border and the cognition of arrival; in between the two there is ignorance of such a sort that is not far removed from knowledge, but close to it and on its doorstep.” (SVF 3.541)

Brouwer elaborates: “wisdom consists in the special disposition of character. As this disposition is the (only) condition for wisdom, the virtuous (or expert) disposition of the Sage need not be accompanied by the awareness of the fact that it is a virtuous disposition.”

This sounds to me rather odd, but I do wonder whether a Buddhist practitioner knows he has achieved enlightenment at the very moment he has, or whether a Christian mystic is aware of a state of divine bliss as it begins. Perhaps, again, the difference lies in whether the transition is triggered externally or the result of an internal change?

The Stoics tried to explain this by way, as usual, of an analogy. Let’s say you have been practicing for a long time a particular craft, for instance playing the flute. It is possible that you achieve “perfection” (whatever that means) at that craft without — again, initially — realizing it. Does it matter? No, because the earliest known characterization of wisdom, Brouwer tells us, goes back to Homer, and it implies that it is the mastery that counts, not the awareness of it.

Despite all the problematic aspects outlined above of the transition to sagehood, Brouwer concludes that in a very important sense the Sage remains a human being: “the sage is in a way ordinary, in the sense that he remains doing what he did before, that is judging each impression and placing it in the overall scheme of things. As it turns out, Stoic wisdom is very much a this-worldly affair: the person who becomes a Sage, will continue to live life as he did before, dealing with judging impressions.”

Becoming a Sage is, in effect, a type of initiation. In the Great Etymological Dictionary edited in 1848 by T. Gaisford, and cited by Brouwer, we find:

“Chrysippus says that the doctrines [logoi] on divine things are rightly called initiations: for these should be the last things to be taught, when the soul has found its stability and has become in control, and is capable of keeping silent [amuetous] towards the uninitiated. For it is a great reward to hear the correct things about the gods and to gain control.”

Notice the reference to “keeping silent to the uninitiated,” which sounds very much like it reflects some mystical approach to knowledge. Brouwer’s comment is intriguing: “Chrysippus apparently considered it prudent that the real truth about the nature of the gods should be kept secret. Chrysippus does not tell us why, but a suggestion is that bringing out truths that reduce the traditional gods to a force in nature did not go down well with the traditional supporters of Athenian civic religion.” This is a tantalizing hint that the Stoics, while not atheists, were potentially considered “impious” by the standards of their culture. And you know what happened to Socrates when that charge was raised against him…

2 thoughts on “On the nature of the Sage: II. How to transition to sagehood”