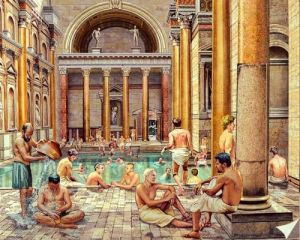 So, famously, begins Epictetus’ Enchiridion, his handbook of Stoic practice. This is, of course, the same sentiment expressed by the 20th century Christian Serenity Prayer, used for instance by a number of 12-step organizations like Alcoholics Anonymous:

(Which, as I point out in my book, How to Be a Stoic, appears more than once in Kurt Vonnegut’s disturbing Slaughterhouse Five.)

The sentiment is found in a number of other traditions as well. Solomon ibn Gabirol, an eleventh-century Jewish philosopher, for example, expressed it this way: “And they said: at the head of all understanding — is realizing what is and what cannot be, and the consoling of what is not in our power to change.”

Shantideva, an eighth-century Buddhist scholar, similarly wrote: “If there’s a remedy when trouble strikes / What reason is there for dejection? / And if there is no help for it / What use is there in being glum?”

Yet, modern Stoics and non-Stoic alike are often confused by the concept of the dichotomy of control. Our critics tend to interpret it as an invitation to quietism, to just endure whatever happens while sporting the mythical stiff upper lip. They are completely wrong, that is definitely not what Epictetus and Zeno (who originated the concept) meant, as I’ll explain (once more) in a minute.

But even some of our own seem to have trouble with it. Here is Bill Irvine’s famous (and highly controversial) attempt to “update” the dichotomy to a trichotomy, in his A Guide to the Good Life:

To illustrate, Bill imagines the example of a tennis player who has managed to shift his attention from the obvious external goal of winning the match to the internal one of playing at his best and accepting the outcome with equanimity:

“[the tennis player] will be careful to set internal rather than external goals. Thus, his goal in playing tennis will not be to win a match (something external, over which he has only partial control) but to play to the best of his ability in the match (something internal, over which he has complete control). By choosing this goal, he will spare himself frustration or disappointment should he lose the match: Since it was not his goal to win the match, he will not have failed to attain his goal, as long as he played his best. His tranquility will not be disrupted.” (p. 94)

This is actually very similar to what Cicero has Cato say in book III of De Finibus, using this time the example of an archer:

“if a man were to make it his purpose to take a true aim with a spear or arrow at some mark, his ultimate end, corresponding to the ultimate good as we pronounce it, would be to do all he could to aim straight: the man in this illustration would have to do everything to aim straight, yet, although he did everything to attain his purpose, his ‘ultimate End,’ so to speak, would be what corresponded to what we call the Chief Good in the conduct of life, whereas the actual hitting of the mark would be in our phrase ‘to be chosen’ but not ‘to be desired.’” (III.22)

Notice that Cicero’s archer behaves exactly like Irvine’s tennis player: they both internalize their goals. Cicero is also very revealing when he says that the Chief Good for the archer is to be a virtuous archer, i.e., to practice archery with arete, or excellence (the same word used by the Greeks to indicate moral virtue). The actual outcome, then, is referred to with the delightful phrase of being “chosen but not desired.”

I have to admit that when I first read Irvine I thought his move from a dichotomy to a trichotomy of control was a good example of updating ancient to modern Stoicism. But then Don Robertson straightened me out on the Facebook Stoicism page: he pointed out that everything we attempt to do can be broken down into two components: the part that is entirely up to us (“opinion, motivation, desire, aversion”) and one that is not up to us, although it can be influenced by us (“our body, our property, reputation, office”). He added that, should one go down Irvine’s road, one would eviscerate the Stoic concept and be left with a fairly banal observation about how the world works.

Don’s take makes more sense, come to think of it, also because it is hard to believe that the Stoics, who were renowned for their contributions to logic, would trip over a simple false dichotomy, as Irvine suggests. Put another way, it’s a bit difficult to conceive that Epictetus did not realize that “our body, our property, reputation, office” cannot be influenced by our choices and actions.

So I came up with what I think is a novel, and hopefully useful, way to conceive of the dichotomy of control, which also makes it crystal clear why it is not, in fact, a trichotomy: vector analysis!

I know, I know, your eyes are rolling while your memory stretches back to those boring lessons about basic math and physics you had to endure in high school. But bear with me for a minute, it will be worth it, I promise.

The horizontal vector visually represents what is under your control. The vertical vector is everything else, i.e., the stuff you don’t control at all. In the case of the archer, the first vector summarizes the archer’s determination, practice, focus, care of the bow and arrow, and choice of the moment at which to let the arrow go. The second vector, by contrast, captures the things the archer has absolutely no control over, including the fact that his target may move (enemy soldiers don’t usually just stand there!), sudden gusts of wind, and so forth.

The combination of these two factors yields the differently colored vector in the diagram, representing the actual outcome. As you can see, the outcome is the combinatorial of the archer’s efforts (what is up to him) and the externals (what is not up to him).

However, notice also the solid block limiting the range of the horizontal vector, which represents an absolute limit to what is under the control of the archer. Without that, we could imagine that all one needs to do is to keep increasing the length of the horizontal vector (i.e., one’s own efforts) to eventually dwarf the contribution of the external factors, thus always achieving one’s objectives.

That, of course, would be Secret-type wishful thinking, incompatible with the way the world works, and the Stoic topos of physics is there to tell us that that’s impossible.

Notice also that there is no equivalent block on the vertical vector, meaning that external forces, for all effective purposes, can (and often will) dwarf your efforts no matter what. One way to conceptualize this is to say that the universal web of cause-effect is gigantic, and our actions are only a tiny fraction of it.

Turn now to the second diagram:

It presents a scenario where your efforts happen to be well aligned with external forces, and as a result, you do achieve your “chosen” (but, remember, not to be desired!) goal. (Note that the three vectors are actually coincident, they are drawn slightly apart for clarity’s sake.)

This is an extreme case where your efforts are entirely futile, because they are dwarfed by the size of the externals. Here, as a Stoic, you accept the outcome with equanimity, reminding yourself that, in the words of Epictetus, you always set yourself up to do two things:

“When you’re about to embark on any action, remind yourself what kind of action it is. If you’re going out to take a bath, set before your mind the things that happen at the baths, that people splash you, that people knock up against you, that people steal from you. And you’ll thus undertake the action in a surer manner if you say to yourself at the outset, ‘I want to take a bath and ensure at the same time that my choice remains in harmony with nature.’” (Enchiridion 4)

To remain in harmony with nature means to choose, but not to desire, certain outcomes. It means that you cultivate an attitude of equanimity toward what happens to you. That is the way of the Stoic, the path to ataraxia.

Congrats, you’re subscribed! You’ll get an email with the details of your subscription and an unsubscribe link.