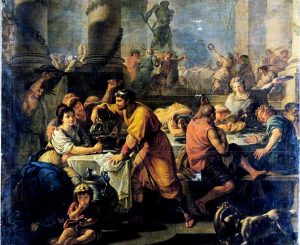 As part of my running commentary on Seneca’s Letters to Lucilius, a very extensive collection of Stoic philosophical precepts, let me say a few words on Letter XVIII, about festivals and fasting, as it deals with the recurring issue — very much relevant still today — of how to comport ourselves on special occasions in which one is expected to over-indulge.

Seneca begins the letter in this fashion: “It is the month of December, and yet the city is at this very moment in a sweat. License is given to the general merrymaking. Everything resounds with mighty preparations – as if the Saturnalia differed at all from the usual business day!” (XVI.1)

This is one of the things I love about reading the Letters: you get these occasional glimpses of Seneca’s private life as well as of life in Rome at the peak of imperial power. That’s a nice bonus on top of the philosophical insight!

Seneca continues: “this is just the season when we ought to lay down the law to the soul, and bid it be alone in refraining from pleasures just when the whole mob has let itself go in pleasures.” (XVI.3)

I know what you are thinking: here comes the killjoy Stoic! But the advice Seneca does is not to refrain from enjoying oneself, but simply not to overdo it: “It shows much more courage to remain dry and sober when the mob is drunk and vomiting; but it shows greater self-control to refuse to withdraw oneself and to do what the crowd does, but in a different way – thus neither making oneself conspicuous nor becoming one of the crowd. For one may keep holiday without extravagance.” (XVI.4)

That’s exactly how I feel at Thanksgiving, Christmas, and so forth. Of course we want to have a good time and share a pleasant moment in life with our family and friends. But do we have to get drunk or sick from overeating in order to do it?

Seneca then takes advantage of the topic at hand to make a more general point about a standard Stoic exercise, mild self-deprivation:

“Set aside a certain number of days, during which you shall be content with the scantiest and cheapest fare, with coarse and rough dress, saying to yourself the while: ‘Is this the condition that I feared?’ … It is precisely in times of immunity from care that the soul should toughen itself beforehand for occasions of greater stress, and it is while Fortune is kind that it should fortify itself against her violence.” (XVI.5-6)

The idea is to train ourselves for the chance that we will really have to do with much less than we are used to: “If you would not have a man flinch when the crisis comes, train him before it comes. Such is the course which those men have followed who, in their imitation of poverty, have every month come almost to want, that they might never recoil from what they had so often rehearsed.” (XVI.6)

Seneca even gives specific advice to Lucilius about the practice: “Endure all this for three or four days at a time, sometimes for more, so that it may be a test of yourself instead of a mere hobby. Then, I assure you, my dear Lucilius, you will leap for joy when filled with a pennyworth of food, and you will understand that a man’s peace of mind does not depend upon Fortune.” (XVI.7)

Okay, I must confess that by Seneca’s standards my own practice is that of a dilettante: I fast once a week, for a day, and occasionally two days. Never got to three or four. I guess there is always room for improvement. Then again, I can attest to the same feeling of joy, once I resume my regular habits. This is the other reason to engage in occasional self-discomfort: to reset what modern psychologists refer to as the hedonic threadmill, to remind ourselves of just how good our lives normally are (assuming, of course, that they truly are, as in my own case).

Seneca then talks to Lucilius about wealth, something he knew a lot about — both because he was one of the richest men in the Empire, and because he had lost a lot on the occasion of his exile (and will lose again soon, when he will fall out of favor with Nero):

“Of course I do not forbid you to possess [wealth], but I would have you reach the point at which you possess it dauntlessly; this can be accomplished only by persuading yourself that you can live happily without it as well as with it, and by regarding riches always as likely to elude you.” (XVI.13)

The very end of the letter is on an entirely different topic, because Seneca was in the habit (especially in the early letters) to close by gifting Lucilius with a gem of wisdom, calling it his “debt” to be paid to his friend. Usually, the quote was culled from another author, and that author often, as in this case, is none other than Epicurus:

“Here is a draft on Epicurus; he will pay down the sum [of the debt]: ‘Ungoverned anger begets madness.’ … The outcome of a mighty anger is madness, and hence anger should be avoided, not merely that we may escape excess, but that we may have a healthy mind.” (XVI.14)

So remember: enjoy the festivals, but in moderation; practice a bit of self-deprivation; and especially don’t get angry!