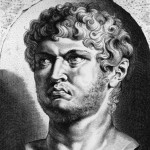 Seneca is controversial even within Stoic circles, because of his association with the emperor Nero, which has been marred by alleged complicity in some of Nero’s most egregious crimes, chiefly the murder of his mother, Agrippina. As I have written in the past, Seneca was no Sage, and indeed he himself pointed that out several times, but that shouldn’t diminish his stature as a Stoic writer. Indeed, he is by far the ancient Stoic from whom we have most extant writings, which constitute an invaluable resource for Stoic practitioners and anyone else interested in Roman culture and philosophy. Still, it is also important to inquire as much as the historical record makes it possible into what roles Seneca played during Nero’s reign, something that is explored in two recent biographies of the philosopher (Dying Every Day, by James Romm; and The Greatest Empire, by Emily Wilson. Check out also the earlier, and more sympathetic, The Stoic, by Francis Caldwell Holland.)

In this essay I will highlight portions of Seneca’s On Clemency, which he wrote in 55-56 CE and addressed to the young emperor, in order to influence the tone of the latter’s principate from the beginning. On Clemency is basically a study contrasting the good ruler with the tyrant, aiming to encourage Nero to practice virtue as the mark of an enlightened sovereign. Before we get started, it may be helpful to recall the major events in the Seneca-Nero timeline:

54 CE: Nero ascends to the throne after the death of Claudius, who was possibly poisoned by Agrippina.

55 CE: poisoning of Britannicus (son of Claudius and the empress Messalina), almost certainly on Nero’s order; the death eliminates a possible future competitor for Nero, and was probably triggered by Agrippina’s threat to him to switch her allegiance to Britannicus.

55 CE: Seneca is accused of having sex with Agrippina but is acquitted; as a result, though, his influence on Nero is reduced (Burrus, the commander of the Praetorian Guard, and an ally of Seneca who helped control Nero, is also accused of conspiracy, but acquitted).

58 CE: murder of Agrippina on Nero’s orders, possibly in response to her participation in a conspiracy, certainly because of her repeated attempts to assert influence and power.

55-60 CE: Nero was consul four times in this period, and several ancient historians — as well as the emperor Trajan — speak well of his principate at this point, in contrast with his later rule.

And now, on to On Clemency. It begins with Seneca openly stating the purpose of the treatise:

“I have determined to write a book upon clemency, Nero Caesar, in order that I may as it were serve as a mirror to you, and let you see yourself … it is worth your while to consider and investigate a good conscience from every point of view, and afterwards to cast your eyes upon this enormous mass of mankind — quarrelsome, factious, and passionate as they are.” (I.1)

Shortly afterwards, Seneca both flatters Nero and subtly reminds him of his good character, lest should he forget it now that he is in power: “The Roman people were in a state of great hazard as long as it was uncertain how your generous disposition would turn out; now, however, the prayers of the community are sure of an answer, for there is no fear that you should suddenly forget your own character.” (I.1)

The second section of the first book then explains what clemency is, and why it is a good thing to practice:

“There are some who imagine that clemency only saves the life of every villain, because clemency is useless except after conviction, and alone of all the virtues has no function among the innocent. …[yet] clemency not only succours the innocent, but often the virtuous, since in the course of time it happens that men are punished for actions which deserve praise.” (I.2)

That said, clemency cannot be handed out indiscriminately, but only if there is hope to reform the person who receives it:

“It is not right to pardon indiscriminately … we must therefore take care to distinguish those characters which admit of reform from those which are hopelessly depraved.” (I.2)

While clemency is something that not just the emperor should practice, it “becomes no one more than a king or a prince; for great power is glorious and admirable only when it is beneficent; since to be powerful only for mischief is the power of a pestilence.” (I.3)

Indeed, in the same section Seneca reminds Nero that the people are willing to subject themselves to great sacrifices, for instance in war, if they can expect their sovereign to be just. This appears to me to be another not so subtle warning to Nero, with several others scattered throughout the text.

Seneca introduces a metaphor of the head of state as the “soul” to the “body” represented by the people, from which he derives this: “if, as we may infer from what has been said, you are the soul of the state, and the state is your body, you will perceive, I imagine, how necessary clemency is; for when you appear to spare another, you are really sparing yourself.” (I.5) Clemency, that is, happens to be in the interest of the ruler himself.

And again at I.8: “the safety of kings on the other hand is more surely founded on kindness, because frequent punishment may crush the hatred of a few, but excites that of all.”

From there Seneca begins to talk about Octavian Augustus as a model of benign sovereign, one that Nero would do well to take to heart and follow. And after the carrot comes the stick: “Clemency, then, makes princes safer as well as more respected, and is a glory to empires besides being their most trustworthy means of preservation. … What is the difference between the tyrant and the king — for their outward symbols of authority and their powers are the same — except it be that tyrants take delight in cruelty, whereas kings are only cruel for good reasons and because they cannot help it.” (I.11)

And just in case Nero didn’t get the message: “No courage is so great as that which is born of utter desperation. In order to keep people down by terror, you must grant them a certain amount of security, and let them see that they have far more to hope for than to fear: for otherwise, if a man is in equal peril whether he sits still or takes action, he will feel actual pleasure in risking his life, and will fling it away as lightly as though it were not his own.” (I.12)

Two more along the same lines: “Cruel punishments do a king no honour: for who doubts that he is able to inflict them? But, on the other hand, it does him great honour to restrain his powers, to save many from the wrath of others, and sacrifice no one to his own.” (I.17) And: “There is no more noble spectacle than that of a sovereign who has received an injury without avenging it.” (I.20)

Why shouldn’t a sovereign effect vengeance on his enemies? Seneca explains at I.21: “Vengeance effects two purposes: it either affords compensation to the person to whom the wrong was done, or it ensures him against molestation for the future. A prince is too rich to need compensation, and his power is too evident for him to require to gain a reputation for power by causing anyone to suffer.”

At I.22 the philosopher reminds Nero what the purpose of punishment actually is: “Let us now pass on to the consideration of wrongs done to others, in avenging which the law has aimed at three ends, which the prince will do well to aim at also: they are, either that it may correct him whom it punishes, or that his punishment may render other men better, or that, by bad men being put out of the way, the rest may live without fear.” Nowhere there there is room for personal vengeance by the emperor, or for cruelty towards his enemies.

Indeed, cruelty is a disease: “This accursed disease of the mind reaches its highest pitch of madness when cruelty itself turns into pleasure, and the act of killing a man becomes enjoyment. Such a ruler is soon cast down from his throne; his life is attempted by poison one day and by the sword the next; he is exposed to as many dangers as there are men to whom he is dangerous.” (I.25)

Seneca then turns almost prophetical: “Sometimes their own guards have risen in revolt, and have used against their master all the deceit, disloyalty, and ferocity which they have learned from him. What, indeed, can he expect from those whom he has taught to be wicked?” (I.26)

The young emperor is treated to a discussion of mercy, which Seneca says is the virtue that is opposite to the vice of cruelty: “Mercy is a restraining of the mind from vengeance when it is in its power to avenge itself, or it is gentleness shown by a powerful man in fixing the punishment of a weaker one.” (II.3) Interestingly, he tells Nero that if there is a danger of erring on one side or the other, then it is better to err by being too merciful, even though that too is a mistake: “Lest under the name of strictness we be led into cruelty, and under the name of mercy into pity. It is less dangerous to make the latter mistake, but both lead us equally far away from the truth.” (II.4)

Seneca also explicitly defends the Stoic philosophy. After stating that some think of it as too strict to be practiced, he says instead that “no school of philosophy is more gentle and benignant, none is more full of love towards man or more anxious to promote the happiness of all, seeing that its maxims are, to be of service and assistance to others, and to consult the interests of each and all, not of itself, alone.” (II.5)

Finally, at II.6 we find more defense of Stoicism, with the implicit suggestion that Nero should regard the practice as an inspiration for his own conduct:

“Thus the wise man will not pity men, but will help them and be of service to them, seeing that he is born to be a help to all men and a public benefit, of which he will bestow a share upon every one. … Whenever he is able he will interpose between Fortune and her victims: for what better employment can he find for his wealth or his strength than in setting up again what chance has overthrown?”

All of the above seems to me to reinforce the idea commonly held by historians that Seneca did try (and succeeded, with the help of Burrus, for about five years) to guide Nero and reign in what must have been even then clear signs of his unstable character. Even Seneca’s speech to justify Agrippina’s murder may be seen as the last attempt at managing a situation that was rapidly getting out of control. (And let’s not forget that Agrippina did conspire against Nero, repeatedly. She was no innocent soul caught in the storm, and likely had in fact murdered her husband, Claudius.)

Very soon Seneca will begin to ask Nero to be allowed to retire, a privilege he will be denied on a number of occasions. The philosopher eventually managed to spend more and more time in one of his villas outside of Rome, where he was however reached by Nero’s emissaries and ordered to commit suicide for having allegedly taken part in the failed Pisonian conspiracy. As I said before, most certainly not a Sage, but a complicated and fascinating man.

2 thoughts on “Seneca to Nero: On Clemency”