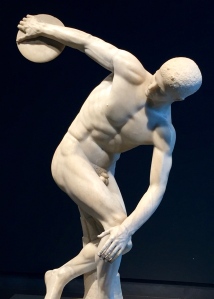 Discobolus, from the Roman National Museum, photo by the author

Stoicism is a practical philosophy, with little tolerance for logic chopping and hair splitting. As Epictetus put it: “We know how to analyse arguments, and have the skill a person needs to evaluate competent logicians. But in life what do I do? What today I say is good tomorrow I will swear is bad. And the reason is that, compared to what I know about syllogisms, my knowledge and experience of life fall far behind.” (Discourses I, 1.32). This is why people interested in Stoicism don’t just read classic and modern authors, they partecipate in practical exercises, such as those offered during Stoic Week, the Stoic Mindfulness and Resilience Training course, and local initiatives such as Stoic Camp.

But what does a regular, everyday Stoic actually do, every day? What does it mean, exactly, to “practice” a philosophy? Rather than write a theoretical essay on this, I figured it may be helpful to some readers to take a closer look at one example of Stoic practice, my own.

I revise my routine from time to time, but it currently consists of a balance of the following elements (you can find a collection of 24 exercises here):

Morning meditation on a classical quote. I choose a passage from one of the ancient Stoics, out of my ever expanding anthology, read it several times, and reflect on it. (I also then post it at the Stoicism Facebook group.) This reminds me of why I chose Stoicism as my personal philosophy, as well as of some of its basic precepts.

Daylong ethical mindfulness. The word used by the Stoics for mindfulness was prosochē, which means paying attention. (Here is my list of key Stoic terms.) What this means, to me, is in part to try to live hic et nunc (here and now), with no regrets about the past and no worry about the future (neither of which is under my control). It also means to remind myself that pretty much everything we do has an ethical dimension, from where we shop for groceries or bank with our money to how we treat our family, friends, co-workers and even strangers. (It helps if one picks one or more role models — Socrates, Cato, Nelson Mandela, or Malala Yousafzai — and, when in doubt, asks oneself: what would s/he do?)

Consciously attempt to embody Epictetus’ “role ethics.” As Brian Johnson has argued in his Epictetus’ Role Ethics: Stoicism in Ordinary Life, Stoic ethics can perhaps best be practiced by following Epictetus’ suggestion of owning the various roles we play in life (father, companion, friend, teacher, colleague, etc.) so that we can play them at our best. This — I should immediately add — isn’t a question of “faking” it, or “performing” in the negative sense of the term, but of taking seriously who we are and our responsibilities toward others.

Evening philosophical diary. Every night I retire in a quiet corner of my apartment and take a few minutes to review the day that just ended, following Seneca’s suggestion: “The spirit ought to be brought up for examination daily. It was the custom of Sextius when the day was over, and he had betaken himself to rest, to inquire of his spirit: ‘What bad habit of yours have you cured to-day? What vice have you checked? In what respect are you better?’ … How sweet is the sleep which follows this self-examination? how calm, how sound, and careless is it when our spirit has either received praise or reprimand, and when our secret inquisitor and censor has made his report about our morals? I make use of this privilege, and daily plead my cause before myself: when the lamp is taken out of my sight, and my wife, who knows my habit, has ceased to talk, I pass the whole day in review before myself, and repeat all that I have said and done: I conceal nothing from myself, and omit nothing: for why should I be afraid of any of my shortcomings, when it is in my power to say, ‘I pardon you this time: see that you never do that anymore?'” (On Anger, III.36)

Occasional premeditatio malorum and/or view from above meditations. Two of the standard Stoic exercises are the premeditatio malorum, a contemplation of possible adversity to come, and the view from above, a meditation that helps us put our troubles into the broader perspective of humanity at large, with its sorrowful history, or even of the cosmos itself, in its vastness in both time and space. Here and here are suggestions on how to do them.

Active studying of Stoicism, by way of reading classics and moderns, and writing about them. This blog is indeed a “web log,” i.e., my public philosophical diary as I proceed in my role as a prokoptôn. In terms of readings, not only I keep going back to the ancients, of course (often reading different translations of a given text), but I also keep expanding my library of modern authors, of which there is an abundance of good ones (just to mention a few: Larry Becker, Margaret Graver, Bill Irvine, Anthony Long, Don Robertson, John Sellars, and many others).

Once weekly fasting. Seneca reminded us several times that one way to appreciate what we have, as well as to prepare for adversity, is to occasionally do without some of our preferred indifferents. Musonius Rufus said that “mastering one’s appetites for food and drink is the beginning of and basis for self-control” (Lectures 18A.1), so that’s what I try to do: once a week I fast for the day and take no alcohol (for Italians, having dinner without a glass of wine is almost a sin…). I call it my “endure & renounce” day, in honor of Epictetus. As a side-effect, this feels good both psychologically (self-control is empowering!) and physically (I feel refreshed and ready to go the following morning).

Regular self-imposed discomfort. This is another version of the exercise just above, and for me it takes the form of, for instance, finishing my shower by turning the water to cold, or going outside in the winter slightly underdressed for the weather. The idea isn’t to suffer for the sake of suffering, nor to do things that actually imperil one’s health. It is, again, both a reminder of what we have and may take for granted, and training for the eventuality that we may actually have to go hungry or with poor clothing — one never knows what Fortuna has in store for us.

Endurance and physical training. The Stoics were of different opinion about physical exercise, which broadly speaking was somewhat de-emphasized by the late Roman Stoics (Seneca, Epictetus, Marcus), and was openly praised by the early Greek ones (Zeno, Cleanthes, Chrysippus). For myself, mindful that Cleanthes was a boxer, and because I appreciated martial arts such as Judo, Kung-fu and Karate when I was young, I signed up at a local gym for kickboxing. I find that it requires endurance, cultivates patience, and develops one’s ability to focus. Mens sana in corpore sano, as the Romans said.

The above may sound like a lot, but most of the activities mentioned actually take very little time, or do not need to be carried out every day. And at any rate, this is just my own example of how to live like a Stoic. Different people will develop their own versions, depending on what they find most useful, as well as on their level of commitment to the philosophy. The important thing is to get started and then stick to it, because as Epictetus put it: “When faced with anything painful or pleasurable, anything bringing glory or disrepute, realize that the crisis is now, that the Olympics have started, and waiting is no longer an option; that the chance for progress, to keep or lose, turns on the events of a single day” (Enchiridion 51.2).
Edited with BlogPad Pro

12 thoughts on “How I practice Stoicism, the nuts and bolts”