Stoics were well known in antiquity for the use of metaphors, as well as for developing concepts that to others sounded rather paradoxical, or even downright nonsensical. Cicero went so far as to write an entire book entitled Paradoxa Stoicorum.

I maintain, though, that the Stoics weren’t fools, and understood perfectly well how some of their notions came across to non-Stoics. However, they used such “paradoxical” ideas and strange metaphors as a pedagogical tool to draw others into considering their philosophy seriously, rather than reducing it to what we today would call a bumper sticker version.

Arguably, one of the most famous metaphors deployed by the ancient Stoics is that of the drowning man, which is supposed to get across the point that we are all equally unvirtuous. A point that is, however, “paradoxically” linked to the idea that nevertheless one can be a prokopton, that is, one can make progress as a Stoic. But if virtue is all-or-nothing, what sense does it make to say that progress can be made?

Here is how Cicero, in De Finibus, has Cato putting the point:

“For just as a drowning man is no more able to breathe if he be not far from the surface of the water, so that he might at any moment emerge, than if he were actually at the bottom already … similarly a man that has made some progress towards the state of virtue is none the less in misery than he that has made no progress at all.” (De Finibus, IV.48)

“I am aware that all this seems paradoxical; but as our previous conclusions are undoubtedly true and well established, and as these are the logical inferences from them, the truth of these inferences also cannot be called in question. Yet although the Stoics deny that either virtues or vices can be increased in degree, they nevertheless believe that each of them can be in a sense expanded and widened in scope.” (De Finibus, IV.48)

These two passages are very dense, let’s unpack them carefully, and then I will introduce my own metaphor to explain what, I think, the Stoics meant.

To begin with, in the first quote Cato is readily acknowledging that there is such thing as progress toward virtue. He is just saying that if we have not yet achieved virtue then we are all equally miserable, both those that are far from the goal and those that are near it. I take this to be a humility check on ourselves: yes, yes, we are prokoptontes, but we are still all unvirtuous, and so there is no sense in feeling smug about those people who are not making progress.

In the second quote, Cato is conceding that the Stoic conclusion may seem paradoxical, but since he believes it has been arrived at logically, then too bad for appearances: if something is right it is right, regardless of how strange it may sound to untrained ears.

But the crucial point comes toward the end of the second quote, when Cato explains that although the Stoics think that virtues (and, for that matter, vices) cannot be increased in degree, they can be “expanded and widened in scope.” What sense can we make of such talk?

Here is one way to think about it. I hope you remember the concept of phase transitions from your Physics 101 days. If not, let me refresh your memory: 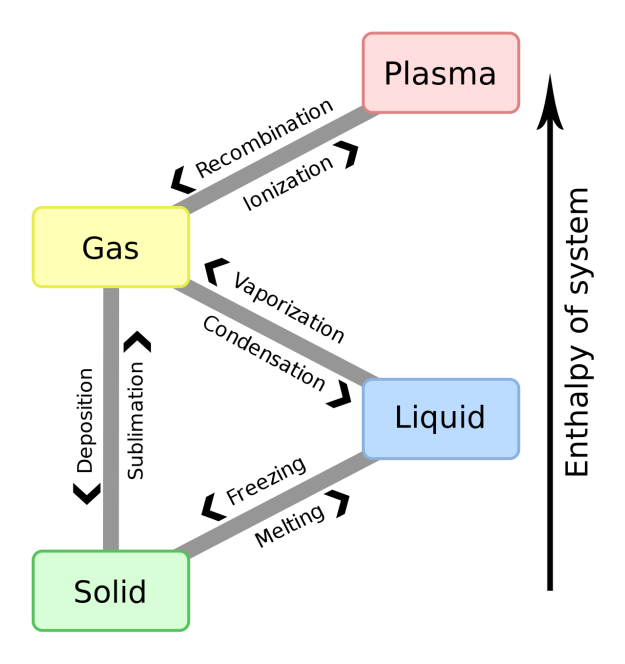 Phase transitions as a function the enthalpy of a system

A transition between two “phases,” i.e., to homogeneous states, of a given substance, occurs when some external conditions — such as temperature — change beyond a threshold that triggers a rather sudden, qualitative change in the physical properties of the substance.

Consider, for instance, the phase transition of water from liquid to gas, something I’m very familiar with as an Italian who often cooks pasta and wants it very much al dente. What I do to arrive at that result is to get a large pot of water, put it on the stove, turn it on, and then wait until the temperature gradually increases below the pot, with the increase being communicated to the water inside. (You should add salt at the beginning, lest you forget to do it later.)

After a few minutes (and depending on the atmospheric pressure, among other things), the water will suddenly (i.e., very, very rapidly, though not instantaneously so) begin to boil, which means that the molecules are going through a phase transition, from liquid to vapor. (That’s the moment to drop the pasta in!) 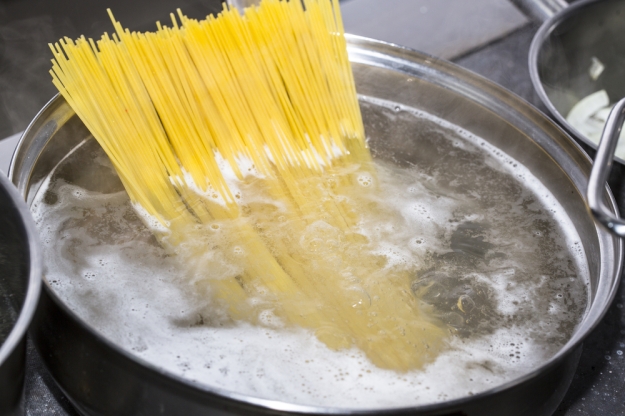 What we witness every time we make pasta, then, is a sudden phase transition — that it, a qualitative change in a physical system — caused by an underlying quantitative one. (There are other such phenomena in nature, like so-called threshold traits in genetics, where a quantitative change in the number of underlying genes results into a qualitative shift in a visible characteristic of the organism.)

It is possible that the Stoics meant something like this when they said that virtue is all-or-nothing and yet one can make progress toward it. Water boils at 100C, and the phase transition is (pretty much) all-or-nothing, in the sense that the molecules are either still liquid or have already transitioned to vapor. Yet the pot of water has definitely “made progress” toward boiling, since it was further from it when the temperature was, say, 60C than when it reached 75C, and so forth until 100C.

So perhaps we should think of Sagehood — if it is possible for a human being, a fact disputed by at the least some ancient Stoics — as a phase transition: one is a normal human being (and thus, in Cato’s words, “in misery”) all the while one is making progress, and then at some point the prokopton transitions into a full fledged Sage.

It is even possible to apply the concept to other philosophies, such as Buddhism. I am largely ignorant of Buddhist literature, but my understanding is that the condition of “enlightenment,” or “awakening” is akin to a qualitative shift, that is, again, a phase transition. But early Buddhism explicitly says that there are four stages that eventually lead to enlightenment. So one is not enlightened while he is going through the four stages, and yes clearly one is making progress toward enlightenment all the while.

Of course one doesn’t have to buy into every ancient Stoic notion in order to be a modern Stoic, nor is it a good idea to rescue every early Stoic concept (e.g., Chrysippus was certainly wrong when he thought the heart was the seat of the mind!). But it is a good idea not to dismiss foreign concepts just because they appear, at first glance, to be strange or nonsensical. I am certainly not a Sage, so in a sense I lack virtue. And yet, hopefully, I am a prokopton, actively making progress toward virtue. Nothing paradoxical about that.