Perhaps against my own better judgment, I went to see Captain America: Civil War. I couldn’t really avoid it. I was in Italy with my brother, who is a big fan of comic books, and I have, after all, taught an entire course on superheroes (and supervillains) and philosophy… Indeed, I used the Marvel “Civil War” saga with my students to highlight the complexities of ethical decision making. (Warning: this post includes spoilers of both the movie and the graphic novel on which it is based.)

The movie gets a surprisingly high popular mark (8.2/10) at the Internet Movie Data Base, though the critics’ meta-score is lower (75/100), but still relatively high. Don’t get me wrong, I enjoyed it because it’s always a pleasure to see Tony Stark, I mean Robert Downey Jr., on the screen, and because I am fascinated by the kind of surreal imagery presented by superheroes movies.

But the book was unquestionably better, much better. Actually, Marvel produced a number of spinoffs of the original saga, but the seven issues that set the stage are a very good entry in the genre.

So let me tell you the basic story, as it unfolds in the novel, why I think it’s relevant to Stoicism, and then why the movie just botches the job, unfortunately.

The drama opens with a group of teenage “superheroes” who fight a number of class-B supervillains somewhere in rural Connecticut. However, something goes awfully wrong, one of the supervillains explodes and a large number of children are killed. This leads to a public outcry about regulating superheroes activities, with populist politicians seizing the opportunity to curb the “menace” that, actually, had up to that point saved countless lives, and sometimes the future of the entire planet, several times over.

The proposed solution is to register all superheroes with the US Government, in the process making their private identities known to the public (in cases in which they already weren’t), for accountability purposes.

Faced with this new situation, the superhero community splits into two camps: the pro-registration group argues that following the new law is the right course of action, and that refusing to do so would allow the already existing culture of vigilantism to grow unchecked, with further catastrophes surely in the offing.

The anti-registration camp, however, responds that what makes superheroes effective is precisely that they are nobody’s agents, they act independently and super partes, on some occasions even going against the not always ethical purposes of any particular government, the US especially.

As I told my students, both sides have good points, and there really isn’t a simple solution readily available. However, I also gave them a hint as to how things are going to develop: pay attention to who’s on which side. 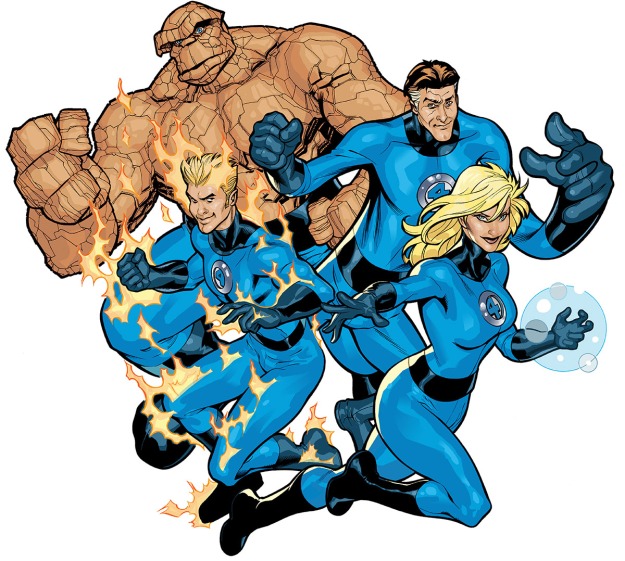 The Fantastic Four, before Civil War

Why is this list indicative? Well, the first group is made up of technologists or scientists, the (oversimplified) epitome of cold rational calculation; the second group is comprised of superheroes who — in the Marvel universe — are always reliable moral compasses. Indeed, Spider-Man actually changes his mind, once he sees the ethically highly questionable tactics that are being deployed by the pro-registration side (like setting up a prison in a different dimension, into which one is thrown without due process, and from which there is no hope to escape; or cloning the mighty Thor, without his permission, a move that soon hugely backfires).

The ethical divide separating the two sides is basically a contrast between utilitarianism (pro-registration) and virtue ethics (against). (There may be some deontology sets lurking somewhere, but I couldn’t find them.) Tony Stark and Reed Richards are obviously well intentioned, but they are so engrossed in their calculations of the consequences of possible actions (literally, in Richards’ case, on a drawing board) that they seem to be oblivious to what they are actually doing.

A pivotal scene in the comic novel pits Reed and his wife, Sue (before she makes up her mind to switch to the anti-registration side). He is intent in the above mentioned calculations, which he claims will solve the problem. Sue is astonished, and points out that “half of their Christmas list” now considers them enemies. She is worried about tearing apart the community, betraying friends, and generally having to live with what she begins to see as a permanent stain on her character and integrity. He is rationalistically convinced that science and math will settle everything, and that people will eventually see the light, with things neatly falling into place.

Needless to say, people won’t see the light, and things will not settle nicely at all.

Captain America is another study in virtue ethics, perhaps the clearest. He obviously displays all four Stoic virtues: he is wise, in the sense that he has an uncanny ability to pick the best course of action under difficult circumstances; he is courageous, both physically and morally; he has a keen sense of justice, treating even his enemies fairly; and he is capable of self-restraint, unlike a number of other superheroes (Tony Stark, for instance, who is an hedonic, self-indulging billionaire).

(You may have noticed that a similar contrast, in terms of working for the government or independently, as well as in terms of virtue ethics, or perhaps deontology, vs utilitarianism, is also presented by Batman vs Superman, though also there things are much more nuanced and interesting in the original novel, Frank Miller’s The Dark Night Returns — not at all to be confused with the similarly titled movies featuring Christian Bale as Batman.) 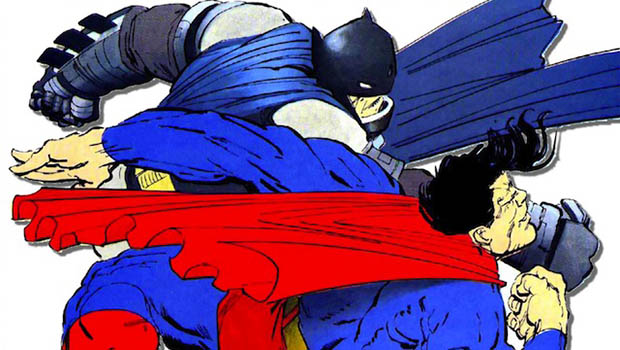 Superman gets an unexpected beating

Indeed, it is Captain America who in the end displays both wisdom and courage and ends the standoff between the two sides (I will not tell you how, or what ensues after his decision, in case the above spoilers haven’t talked you out of reading the book).

The movie, alas, is a different story. (Warning! More spoilers ahead!) Several key points have been dramatically altered, with the effect that things are much more black and white, and clearly end up favoring the pro-registration side. (I suspect that Robert Downing Jr. simply has it written in his contract that he can’t play bad guys…)

To begin with, the incident that leads to the Superheros Registration Act is actually caused by the Avengers themselves (during the so-called “battle of New York,” in their first movie), not by children amateurs. So they are directly responsible, and are not part of a group-type punishment.

More importantly, it is the UN, not the US, that pushes for the law. This alters the ethical balance, because Captain America and his friends cannot claim that they could remain super partes only by operating as free agents. After all, the UN is the quintessential super partes agency, however imperfectly it may work.

Furthermore, and this is crucial, Captain America’s main reason to square off against Ironman is to protect his old friend, the brainwashed — highly dangerous and unpredictable — super-soldier James “Bucky” Barnes. Finally, Spidey is seen in this movie on the pro-registration side (he doesn’t have motive, or time, to change his mind during the unfolding of the plot), and the Fantastic Four — with the dramatic, intra-family contrast between Reed Richards and Sue Storm — are simply not there. Thor is a no-show also.

So, you may or may not enjoy the movie, despite its limitations. But as a Stoic, or simply as a person interested in virtue ethics, you will definitely relish the graphic novel.