I am happy to report that I am almost finished with my new book, tentatively entitled How to Be a Stoic, to be published by Basic Books next year. I’m even happier to report that I have experienced a coup d’etat with no damage, either physical or emotional. Let me explain.

As part of my research for the book I went to modern day Pamukkale, in Turkey (see image of the spectacular theater there), a UNESCO World Heritage site that contains the ruins of Hierapolis (literally, holy city), the birthplace of Epictetus. You see, my book focuses on the slave turned philosophy teacher, imagining a conversation between me and him, based on the Discourses, which I use to explore a number of aspects of Stoicism and how they apply to modern living.

Since I talked my companion (and a close Turkish friend) into coming with me, we turned the trip into a two-week long vacation during which we explored many of the archeological sites of southwestern Turkey (besides Hierapolis, we visited Aphrodisia, Ephesus, Laodicieia, Didyma, Miletus, Priene, Pergamon, and Izmir), and even went as far as Cappadocia (I really recommend the balloon flight over its rugged landscape, at dawn, even though it has nothing to do with Greco-Roman history).

We then spent the last three days in gorgeous Istanbul, despite the misgivings of some family members, who pointed out that the city had been the site of a terrible terrorist attack just days before we made it into the country. But, we reckoned — correctly, as it turned out — that the likelihood of another attack so close in time, especially with the predictably heightened security following the first one, would make for an acceptably low risk.

However, what we didn’t take into account was the likelihood of a coup d’etat, even though Turkey has seen four of them since the 1960s. Well, five now, if we count the one we experienced the day before leaving.

The setting was somewhat surreal. We were having dinner with a couple of locals at a wonderful Cretan restaurant in the historic district of Istanbul while I noticed that everyone at a nearby table, one of the few still occupied late in the evening, was intensively looking at their phones. My immediate interpretation was that I was witnessing yet another example of the damaging effect of modern technology: these people would rather check Facebook than talk to their dinner companions. But it soon became clear that I should have denied assent to that first impression, since they were both too engrossed and too visibly concerned for that explanation to be correct. No, they were following the news of an unraveling coup d’etat.

The reaction at our table was remarkably calm. We finished the wine and kept chatting, while our Turkish friends caught us up with the history of such things in their country, as well as the most recent developments of the current political situation, including the increasingly authoritarian and strongly pro-Islamic government of prime minister Recep Tayyip Erdogan.

(Erdogan has since used the failed coup — if that’s what it was, since several within Turkey and in the European press are somewhat skeptical of it — to increase his own power, purge and arrest journalists and academics, and noticeably move Turkey further away from being a modern secular state and in the direction of an Islamic-leaning autocracy.)

At some point, though, we had to decide what to do. There were rumors that all bridges were closed by the military, which, if true, would have meant no way for us to cross back to our hotel in central Istanbul. (It turns out that the two bridges on the Bosphorus, connecting the Asian and European sides, were closed, but not the others.)

So we hit the streets, looked for a cab, didn’t find one available (of course), and eventually cautiously approached the bridge on foot. We saw police cars blocking some streets, and heard fighter jets flying overhead. The good news was that social networks were still up (they never went down, in fact), so we could reassure our families that we were okay, for now.

Indeed, the situation was eerily calm. Here is a photo I took of people fishing on the bridge at night, as if nothing were happening to the country at all: 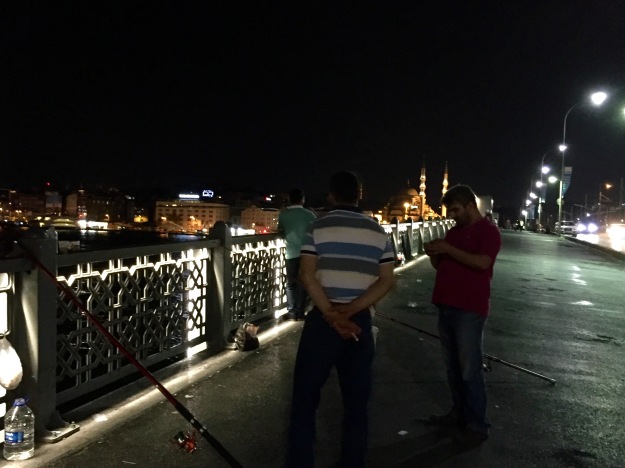 Puzzled, we reached our hotel and retired for the night. Over the next several hours we kept listening to helicopters and fighter jets overhead, accompanied at one point by two loud explosions which turned out to come from nearby Taksim Square.

But when we woke up in the morning things appeared to be almost normal, with people in the streets (though not as many as usual), and coffee houses open (though not many museums). The airport hadn’t reopened yet, so we kept a low profile, walking the neighborhood and just reading and keeping an eye on the news until we were told that our flight had been changed but was on. We were to make it to the airport around midnight, headed for Paris and then New York.

And here is where things got a bit more troubling. When we approached the airport in a taxi, the streets were blocked by hundreds of people cheering the failure of the coup, even though the whole thing had left thousands dead or injured, mostly in the capital Ankara and some smaller cities scattered throughout the country: 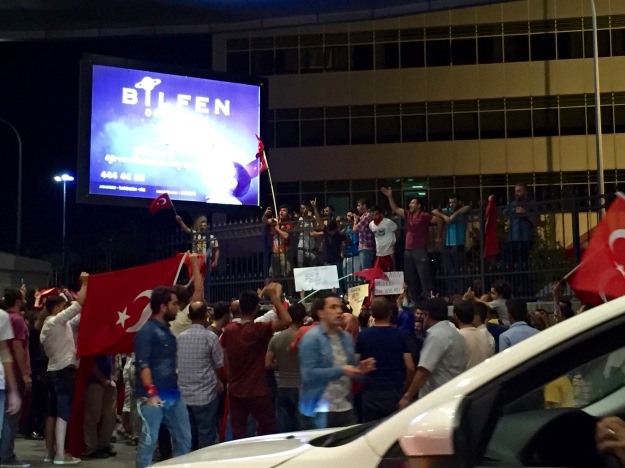 As a general rule, it is not a good idea to be blocked in traffic in the midst of a frenzied crowd, especially when you don’t speak the language. When such crowd is made of mostly young men excited at the blood they saw in their own streets, that’s even more of a dispreferred indifferent. And you definitely don’t want to see your taxi driver starting to shout to another driver out of frustration for not being able to move forward.

(Then again, Turkey isn’t the US, and people don’t normally carry concealed guns with them.)

At any rate, we did make it to the terminal, checked in, and safely got back to Europe first and the US next.

So what did I learn, as a prokopton, from the experience? This was first and foremost a very strong reminder that few things are under our control. It’s something we remind ourselves everyday and try to keep in mind, but there is nothing like a sudden overturn of the social order to forcefully bring the point home.

Second, I was surprised at how calmly my companions and I actually behaved throughout those 24 hours in Istanbul. True, we were never in any apparent physical danger, but the situation was definitely uncertain, and especially once we heard explosions and military planes overhead a bit of anxiety would not have been entirely out of place. I do credit at the least part of our reaction to practice of or familiarity with Stoicism (my Turkish friend is a practitioner, and my companion has certainly heard more than enough about it from me, over the last couple of years…). But of course this was not a controlled experiment, so to attribute causality with nothing other than a hunch is not advisable.

Third, especially while driving through the chanting crowd at the airport I was reminded of just how easy it is to emotionally manipulate people, particularly playing on their fears and anger. It reinforced the Stoic (and Epicurean, to be fair) idea that such emotions should never be given assent, but always kept in check in favor of the development of more positive attitudes, like an attempt to rationally understand why things are happening and where one’s country is headed as a consequence.

11 thoughts on “Here’s something you can’t control: a coup d’etat!”