I’m an educator, so I naturally often think about education. Having taught at the college level for more than a quarter century, I can tell you that things are not going well. You can look up studies and statistics, but they largely back up my personal conclusions based on direct experience: American education is much worse than its European counterparts, and has gotten worse over the past several decades. And the bad news is that a number of European educational systems are following suit because the local politicians got this insane idea that if it’s done in America it must be good. Not really, by a long shot.

I could tell you a lot of stories of college-level students that I got in my classes who should never have finished high school. They don’t know how to write, and they don’t know how to think. And I cannot teach them that. My job is to refine their skills in those departments, but I have to have sufficient raw material to play with, or it’s hopeless. I routinely fail an uncomfortably high percentage of students in my courses (to the chagrin of my Dean), but I can assure you that I am actually very generous in my grading. My honest estimate is that between 50% and 70% of the students I get ought to fail their courses.

This, obviously, is not (entirely) the fault of the students. Many of them are hard working, but they have not been given the necessary tools during their high school years, and before that their middle school years, and before that their elementary school years. Arguably, in fact, elementary school is the most important, most formative period of schooling of them all, and if we really cared about education we would make sure that our elementary teachers were superb, and we would reward them accordingly, both in hard cash and in social status. Clearly, we don’t.

What has any of the above to do with Stoicism, or even with Greco-Roman philosophy more generally? A lot, as it turns out. Let me introduce you to Isocrates, a Greek rhetorician who lived from 436–338 BCE. He preceded Stoicism and was the first known teacher to make a crucial move: instead of going around from city to city in search of pupils, he settled in a place — Athens — founded a school, and waited for students to come to him. Indeed, he spurred his rival, Plato, to do the same, which resulted in the longest-lived ancient school of philosophy, from which modern universities still take their name: the Academy (until the Byzantine emperor Justinian closed it down in 529 CE). The idea proved impactful on the long term: in 1088 CE the city of Bologna, in northern Italy, figured out that it would be best to offer itinerant teachers protection and a stable place where to teach, to keep the best talent from wandering to other places. The first university in the world was thus born.

Isocrates and Plato presented their fellow Athenians with competing models of paideia, the rearing and educating of the ideal citizen. The concept was that the point of education is neither (just) to allow someone to make a living, nor (just) to spend some time “finding yourself” while figuring out what life is all about. Rather, education is in the business of molding the next generation of citizens. This means young people who are capable of forging their way through life, including but not limited to finding and holding jobs. It means introducing them to the sciences, the arts, and the humanities, because they are intrinsically valuable, because they are instrumental in pursuing a flourishing life, and because we need citizens who are capable of contributing to the political (in the broadest sense, not just voting) life of the community. (If you doubt that our modern educational system doesn’t come even close to these desiderata, I invite you to reflect on the ongoing spectacle of the US Presidential primaries, just to get started.)

Of course the powers that be did not like what Isocrates was trying to do, so he had to defend himself from charges that education corrupts the youth — essentially the same accusation that led to Socrates’ execution in 399 BCE (when Isocrates was 37). Things haven’t changed much to this day. True, no administrator or politician has asked me to drink hemlock just yet, but the whole system of public education has been under relentless attack for decades now (not only in the US), so that we have the illusion of affordable education for everyone, while the reality is anything but.

It would be obviously anachronistic to advocate going back to paideia (which was designed originally for the aristocracy, anyway, though Isocrates meant it as a tool for democracy). But let’s take a quick look at it and see it was structured. To begin with, paideia meant a simultaneous focus on three areas: theoretical disciplines, applications, and socialization. The Greeks were striving for kalos kagathos, the beautiful and good, which later on found new incarnations in the ideal of the Medieval knight and in that of the English gentleman. (Yes, both of them exclusively catering to males, but there is nothing inherent in the concept that should make it so, other than the limited views of the people of those times.)

Specifically, paideia encompassed the study of rhetoric, grammar, philosophy, music and poetry (as well as other liberal arts), and that of arithmetic and medicine (and other sciences). But it also included training in gymnastics and wrestling, because mens sana in corpore sano (a healthy mind in a healthy body).

This approach lasted for centuries, expanding to the Roman world. I recently found an interesting little example of it. I went to visit the underground remains of Domitian’s stadium, which today is Piazza Navona, in the center of Rome. This is what the place looked like then: 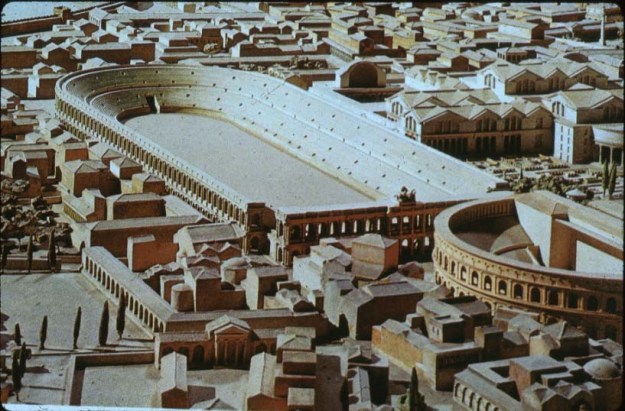 It was called a “stadium” because it was used, among other things, for running competitions, the distance to be covered being that of one stadium, or 600 feet. (While we’re at it, the word “athlete” comes from the Greek athla, which means prize: athletes were those who competed for prizes.)

What is most interesting about it, in terms of the discussion at hand, is that the stadium was conceived to host the Capitoline Agone, the Roman equivalent of the Olympic games. The games, obviously, featured athletic competition, though not of the gruesome, gladiator-style known from other Roman theaters. Rather, there were running races, boxing, pankration, discus throwing, long jumping, and javelin throwing.

But the key concept of the Capitoline Agone was to reflect the broader view of “games” that the Greeks had developed, and which was in turn based on their notion of education, the paideia. Accordingly, “athletes” competed in music, poetry, and theater. And the stadium often filled to capacity, about 30,000 spectators. I simply cannot imagine Yankee Stadium being used for something like that nowadays.

The idea of updating paideia for modern times occasionally resurfaces, for instance in the multi-volume work by Werner Jaeger, Paideia: The Ideals of Greek Culture; or, more recently, in Mortimer Adler’s Paideia Proposal: An Educational Manifesto. As far as I can tell, neither of these attempts had any lasting effect, and I certainly don’t imagine a simple blog post to have any either. But perhaps it is time to profoundly reassess what we mean by education and how we implement it. And maybe the ancient Greco-Romans still have something useful to tell us on how to go about it.

24 thoughts on “On education, Stoic and otherwise”