Below is a handy dandy decision making flow chart for the practical Stoic, in which I attempted to encapsulate a modern rendition of the basic precepts of Stoicism as they apply to everyday life.

It doesn’t matter whether the decision to be made is comparatively trivial (should I have pasta or beef for dinner?) or momentous (is this the sort of profession I wish to pursue for the rest of my active life?). If our goal is to live the best life we can live, what the ancients call a eudaimonic existence, then we need to be mindful of what we do and why.

Let me walk you through the decision making flowchart (click on it if you want to see a larger version): 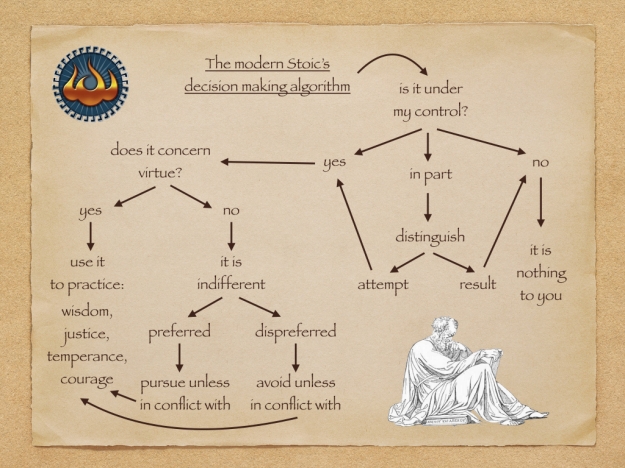 Starting at the top-right, the first question to ask yourself is whether whatever it is you are thinking of doing is under your control. Remember Epictetus: “We are responsible for some things, while there are others for which we cannot be held responsible.” (Enchiridion 1.1)

If the answer is no, then the thing in question is nothing to you and you should not give it any further thought. It will be what it will be. If the answer is yes, then you move to the next question, on the top-left of the diagram. Before we get there, however, there is a third possibility — as Bill Irvine pointed out in his A Guide to the Good Life: you may have partial control over the issue. In this case Irvine advises, and I agree, to distinguish the part that is under your control from the one that isn’t, thus reducing the middle option to one of the other two in the diagram. Broadly speaking, the effort (or, as Irvine puts it, the internal goal) is up to you, while the outcome (the external goal) is not, because other circumstances may interfere with it.

Here is how Cicero explains the concept: “For though if a man were to make it his purpose to take a true aim with a spear or arrow at some mark, his ultimate end, corresponding to the ultimate good as we pronounce it, would be to do all he could to aim straight: the man in this illustration would have to do everything to aim straight, yet, although he did everything to attain his purpose, his ‘ultimate End,’ so to speak, would be what corresponded to what we call the Chief Good in the conduct of life, whereas the actual hitting of the mark would be in our phrase ‘to be chosen’ but not ‘to be desired.’” (De Finibus Bonorum et Malorum, III.22)

Moving now to the left part of the diagram, consider the question: does it concern virtue? The pursuit of virtue, for the Stoics (and for Socrates) was the Chief Good in life, the only thing that truly matters. If the answer is yes, then, your duty as a Stoic is to do whatever allows you to practice the four cardinal virtues of wisdom (the ability to determine the best course of action under difficult circumstances), justice (the most obviously socially oriented of the Stoic virtues), temperance (the most inward looking, concerned with controlling your own excesses), and courage (which does not have to be, and indeed often is not, just physical, but more broadly the determination to do the right thing).

Suppose now that the answer is no, whatever you are considering doing doesn’t really affect the moral dimension encapsulated by the virtues. According to the Stoics, we are then talking about an “indifferent,” meaning not something that doesn’t matter, but rather something that does not concern your moral character, and is therefore not an aspect of the Chief Good.

The Stoics, unlike the Cynics, recognized that human life isn’t all about virtue, it has many other dimensions as well. Some of these dimensions have positive and some negative aspects. The first are “preferred” and include things like health, wealth, education, pleasure. The second ones are “dispreferred” and encompass sickness, poverty, ignorance, pain.

(One might be surprised at my inclusion of pleasure under the preferred indifferents, especially considering the Stoics’ well known antipathy for Epicureanism. Indeed, some Stoics, like Musonius Rufus and Marcus Aurelius, were rather disdainful of even small pleasures — especially, it appears, of a sexual or culinary nature. Epictetus was more open to the idea. But it is Seneca here that is the most reasonably sounding chap: “For when I don suitable attire, or walk as I should, or dine as I ought to dine, it is not my dinner, or my walk, or my dress that are goods, but the deliberate choice which I show in regard to them, as I observe, in each thing I do, a mean that conforms with reason.” (On the Happy Life, 11))

It is permissible for a Stoic to seek the preferred indifferents and to stay away from the dispreferred ones, so long as doing so does not interfere with the virtues. This is a crucial point: it is fine, say, to enjoy a good meal (pleasure), but not if your food has been procured by inflicting unnecessary suffering on animals (some Stoics were vegetarian, but this is not a necessity), or at the cost of significant environmental damage. Conversely, it is both natural and permissible to avoid pain, but not if it means, say, that you are giving up your friends and family’s whereabouts to a torturer bent on killing them (this is why the Sage — the ideal Stoic — is “happy,” meaning virtuous, even on the rack).

And that’s it! Easy, no? Well, not quite, since Stoicism — when taken seriously — is actually a demanding philosophy of life. You will fail, over and over again, and you will never achieve Sagehood. But the whole point is to try, and at any rate life is a process, not a trajectory toward a goal. Here is how Marcus reminds himself of this point:

“Do not be disgusted, discouraged, or dissatisfied if you do not succeed in doing everything according to right principles; but when you have failed, return again, and be content if the greater part of what you do is consistent with man’s nature.” (Meditations V.9)

P.S.: the figure on the upper left of the diagram is a modern rendition of the Stoic fire / logos, you can find the story here. The figure on the lower right is Epictetus, sitting on a book that is emblazoned with one of his mottos: “Endure and Renounce” (from Fragments 10: “There were two vices much blacker and more serious than the rest: lack of persistence and lack of self-control … endure and renounce.”)

16 thoughts on “What Would a Stoic Do? The Stoic’s decision making algorithm”