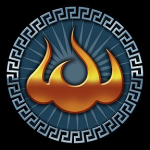 Fascinating chapter by Michael J. White on Stoic natural philosophy (“physics”) in the Cambridge Companion to the Stoics. As is well known, the Stoics thought that natural philosophy (we’d call it science today, though their version included also what we would term metaphysics) is relevant to ethics, because if one is to “live according to nature” one better form the best possible understanding of what nature consists of.

As White puts it: “the common contemporary assumption that it is both possible and desirable to undertake a ‘value-neutral’ investigation of nature is quite foreign to Stoic thought. … the Stoics themes of the unity and cohesion of the cosmos and of an all-encompassing divine reason controlling the cosmos are of fundamental importance to Stoic physics.”

One of the characteristics of Stoic natural philosophy is their readiness to depart from commonsense, in this anticipating modern science. White mentioned the example of Chrysippus arguing that a bit of wine thrown in the sea will interpenetrate with the whole sea.

For the Stoics everything real was corporeal, but White adds an important qualification: “‘everything real’ here designates what exists (ta onta). The Stoics had a wider category of ‘something’ (ti) that included, in addition to what exists (bodies), incorporeals or ‘subsistents’ (ta huphestôta) such as void, place, time, and what is ‘sayable’ (ta lekta: meanings).” (see my post on Stoic logic)

“The Stoics … followed the precedent of various Presocratics and of Plato in holding that the ‘whole cosmos is a living being (or animal: zôion), ensouled and rational, having as its ruling principle (hêgemonikon) aether [typically equated with fire by the Stoics]’. … What is most remarkable about this ‘vitalism’ is that the Stoics evidently insisted that the active, life-giving, rational, creative, and directive principle of the cosmos is just as corporeal as is the passive, ‘material’ principle.”

Interestingly — especially to me as a biologist — is that the Stoic conception of the universe was different from the mechanical one that became popular with the Scientific Revolution of the 16th and 17th centuries. They thought of the universe in an organic, holistic manner, as if it were a biological organism.

White goes into some detail about fundamental and less fundamental Stoic ontological principles (the archai vs the stoicheia) and discusses two kinds of Stoic “fire”: “one is uncreative and changes its nourishment [i.e., fuel] into itself; the other is creative, the cause of growth and preservation, as it does in plants and animals, where it is their “nature” (phusis) and soul. This is the sort of fire that is the substance of the stars’.” He adds that another author, Sambursky, actually interpreted the Stoic pneuma as in a sense anticipating the modern concept of force field. This, needless to say, is at the very least controversial. (I don’t much go for reading back modern science into ancient texts, of any tradition. At best one can say, for instance, that the Greek atomists had some kind of intuition about the basic constituents of matter, but it would be preposterous to suggest that they had anything like the concept of atom as we get it from modern science.)

White then discusses the Stoic idea of cosmic cycles, where the universe begins anew after every conflagration. The orthodox view was that things would repeat themselves exactly in the same manner, because god-the-demiurge had set things at the best of their possibilities the first time around, so why would he change them on any of the next cycles? Apparently, however, there was a minority view that held that the cycles are not identical. Interestingly, Robert Unger and Lee Smolin have recently discussed a number of alternative cosmological models, some of which do resemble both Stoic takes on cycles (but, again, see my parenthetic statement above about reading too much modern science into the ancients’ writings).

A good chunk of White’s chapter is devoted to the Stoic concept of causation and its relation to fate: “In Cicero’s De fato, fate is identified with ‘antecedent causes.’” The Stoics, relates Quintus Cicero in Cicero’s De divinatione, consider fate an issue of physics, not superstition. Indeed, they regarded “chance” as simply a word indicating something that is not clear to human understanding: if we had more information, we could account for the precise causes of every event. This, of course, truly is a very modern deterministic view, even though the Stoics didn’t arrive at it via mechanistic philosophy.

Which of course leads us straight to the issue of free will:

“it seems that most Stoics wanted to allow some conception of human responsibility. The consequence is one of the first explicit occurrences of soft determinism in Western thought … Cicero reports that Chrysippus wished to ‘strike a middle position’ between those who hold ‘all things happen by fate in such a way that fate bears the force of necessity’ and those who hold that the ‘motions of minds are voluntary and without any fate’. … Like subsequent determinists such as Spinoza, orthodox Stoics shift the emphasis from human responsibility to human worth and dignity.”

The last major topic of the chapter concerns the Stoics’ “anti-corpuscolarianism,” i.e., the idea that everything is interconnected and contiguous in the universe, in stark contrast with the atomistic philosophy held by the Epicureans and, of course, the Presocratics. While the doctrine of “total blending” that the Stoics derived from their anti-corpuscolarianism ran into deep criticism by some of their contemporaries (and we don’t have any documentation of Stoic responses), it is again fascinating — but only in a suggestive way — to think that modern physics too is moving away from corpuscolarianism, for instance with the idea of a single quantum wave function representing the entire universe.